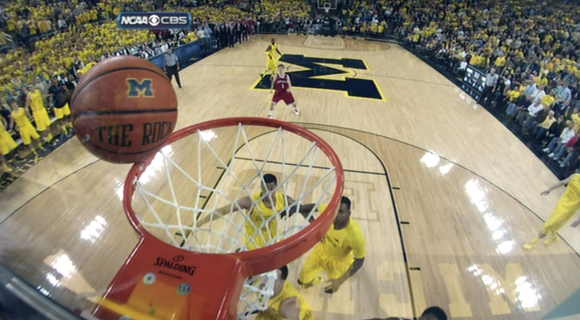 Thoughts on a 72-71 win against the Wolverines:

This had the makings of a disaster.

The Hoosiers looked out of sorts for too long in the first half after bolting out to a 10-3 lead. Hanner Mosquera-Perea — who hadn’t played since MSU on Feb. 19 — and Remy Abell were hoisting misses during a nearly five-minute scoring drought. After a couple buckets, Indiana would then hit another four-minute scoring drought and find itself down a season-high 11 points, as the Crisler Center reached fever pitch.

It was maybe the most listless nine minutes of play from the Hoosiers all season in a game they desperately needed to bring it. But eventually the ship began to sail the right course again. Victor Oladipo got — what else? — a steal and a lay-in. Christian Watford (1-of-7) made his only bucket of the game on — what else? — a trailing 3-pointer. Cody Zeller, after looking soft, started to assert himself for scores and — what else? — trips to the free throw line.

At half, despite scoring under a point per possession, the Hoosiers were down just 33-30.

The second half would be a back-and-forth affair. Indiana went up 36-35 on a Jordan Hulls 3-pointer. The Wolverines then pushed the lead to six at the 15:22 mark, after back-to-back Trey Burke and Tim Hardaway 3-pointers. In the final 20 minutes, the Wolverines would connect on 7-of-12 from distance and never turned the ball over in a stadium they were perfect in this season … until this late afternoon. Burke continually broke down the D, kept his dribble to the baseline and found open teammates in the corner, who would connect on the 3-ball.

But the Hoosiers stayed in it all second half because they had some advantages of their own — namely size and offensive rebounding. Zeller would continue to attack and get to the line. He finished with a beastly 25 points (10-of-19, 5-of-8 from the line) and 10 rebounds. He must continue to attack and stay the course and want it like he did today, with tournament time officially here. It wasn’t all great, as Zeller recorded six of Indiana’s 14 turnovers, but with his aggression comes a bit of sloppiness now and again.

In a game they didn’t shoot particularly well, (42.9 percent from the field, 47.9 effective field goal percentage), second-chance points were enormous for the Hoosiers. They rebounded 57.1 percent of their misses and the effort led to 17 second-chance points. Jeremy Hollowell got a rebound and put it back in. Will Sheehey — who had a huge 10 points, including two triples — got a putback for a score. Victor Oladipo ripped a Watford airball prayer out of the sky as the shot clock was expiring and connected for two as the buzzer sounded.

And so this one became a game where you could hardly watch because it became that thrilling, that nail-biting with a Big Ten title — one outright for the Hoosiers, one shared for the Wolverines and Badgers and Spartans — on the line. But just as quickly as it was knotted up in the final minutes, it seemed like it was over. Indiana came up short on three straight possessions — a missed Hulls three, a Yogi Ferrell entry pass to Zeller that went out of bounds, a travel by Zeller — and found itself down four as Jordan Morgan and Hardaway Jr. hit shots inbetween those possessions.

And after Watford fouled Glen Robinson III on a breakaway and he split one of two at the line, the Hoosiers were down five (71-66) with 52 seconds left and a share of the Big Ten title seemed all but certain … until the Hoosier rose up once more. Zeller tipped in a miss of his own to cut it to three. Hardaway Jr. missed the front end of a 1-and-1 and Zeller would hit two free throws on the IU end. 71-70. Burke missed the front end of a 1-and-1. And there was the mighty Zeller again for the Hoosiers, scoring the go-ahead bucket with 14 seconds left.

Burke — who was sensational at times, hitting impossible shot after impossible shot, but would be inefficient just as he was in Bloomington (20 points on 20 shots) — dribbled down the court and took a ball screen from Jordan Morgan. He drove on Zeller, flipped one up that hit the opposite side of the rim and came back to the left side. Morgan would tip it back up with his left hand. The ball hit the backboard and once again found itself on the opposite side of the rim … and hung … and hung … and fell off the cylinder. #TheBreathofGod blew the Hoosiers’ way in the final seconds of a wild Big Ten season and victory was theirs.

The combo punch of Zeller and Oladipo (14 points, 13 rebounds) knocked out Burke in the end, because two National Player of the Year candidates are better than one.

In a year where Indiana fans griped and moaned about this team after losses — and even after wins — here’s the reality: The Hoosiers just won the outright Big Ten title for the first time in 20 years. And save for (maybe) a Friday loss in the Big Ten Tournament, are a strong candidate to grab a No. 1 seed — perhaps the No. 1 overall seed — heading into the NCAA Tournament. In a college basketball season where the winds keep shifting and no one seems certain just who is really the best team in the land, Indiana just won the toughest conference in the nation on the road. What more is there to ask for at this point after all this team’s been through in the Crean era?

Bigger fish left to fry this season as tournament time is now officially upon us. But no reason to look to the future. Tonight is all about the present, and the Hoosiers got it done in the most spectacular of fashions.