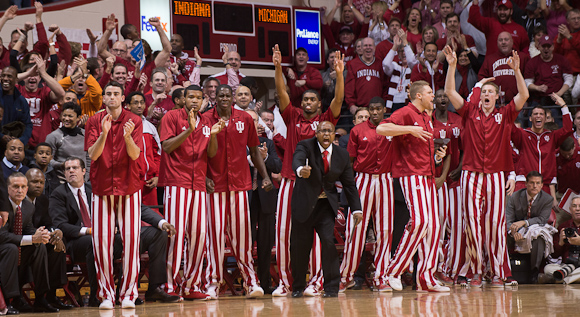 We’re down to 16 days remaining until Selection Sunday and despite a loss earlier this week at Minnesota, Indiana continues to hold its position from a seeding perspective for this year’s tournament. The Hoosiers can clinch the outright Big Ten regular season championship with three more conference wins, which could lock up the top spot in the Midwest regional that will be played at Lucas Oil Stadium. With just three regular season games to go, it’s time for another edition of March Watch, a look at where Indiana stands in terms of the NCAA Tournament.

The Hoosiers have only played once since our last update and despite dropping a 77-73 decision at Minnesota, they still boast one of the strongest overall profiles in the country. In the most recent update, Indiana is No. 1 on the s-curve of ESPN.com bracketologist Joe Lunardi ($).

Indiana’s RPI dropped one spot since our last update and its strength of schedule figure rose four spots.

The Hoosiers remain the No. 1 seed in the Midwest in all three of the bracket projections we’re tracking with the projected path to Atlanta starting in Dayton and then going through Lucas Oil Stadium in Indianapolis. Several top teams, including Duke, Michigan, Florida, Arizona and Syracuse, also fell this week, so that’s helped IU’s position remain firm. The Bracket Matrix, which aggregates nearly every bracket projection available, has the Hoosiers as the overall No. 1 seed and Crashing the Dance, which uses brackets from the past to predict what the selection committee will do, has IU as the fourth No. 1 seed.