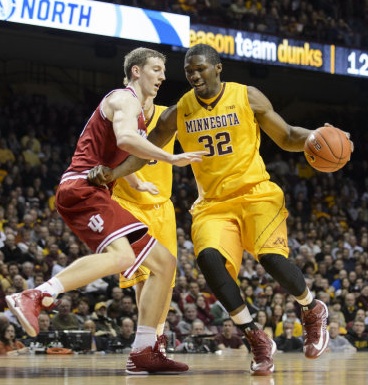 With a chance to clinch an outright Big Ten championship at home within its reach, Indiana went to Minnesota on Tuesday night as a five-point favorite and exited with a 77-73 loss.

· Rebounding, rebounding and more rebounding: It was the first thing Tom Crean discussed in his postgame comments and for good reason. The Hoosiers were dominated by Minnesota’s offensive rebounding allowing a season-worst 53.5 offensive rebounding percentage by an opponent. That mark topped the loss to Butler where the Hoosiers allowed the Bulldogs to corral 48.7 percent of their misses. Whether it was IU being out of position or getting beat to loose balls, Minnesota came into the game as the nation’s best offensive rebounding team and deserves credit for being the aggressor in that regard. The Gophers finished with 23 offensive rebounds and 21 second-chance points. “Bottom line, in this game there’s a lot of different things to look at, but there’s nothing more glaring than the rebounding,” Crean said. “So that was our biggest issue.”

· For a night, IU didn’t have the best player on the floor: Cody Zeller and Victor Oladipo are worthy of all the notoriety they’ve received for national player of the year in recent weeks. They’ve earned it. But on Tuesday night, Minnesota’s Trevor Mbawke was the best player on the floor in Williams Arena. Mbakwe set the tone early with 10 of Minnesota’s 14 points and when he wasn’t on the bench with foul trouble, IU had no answer for the sixth-year senior. Mbakwe finished with game-highs of 21 points and 12 rebounds, six of which were offensive. “He’s a grown man. He’s big, he’s strong,” Oladipo said of Mbakwe. “He’s been there, done that. So you know he was going to come and play 110 percent. He played a great game. He’s the reason they won.”

· The zone defense wasn’t IU’s problem: On the broadcast, ESPN analyst and former Indiana guard Dan Dakich questioned Crean’s decision to play a zone in the second half. On one sequence, Dakich predicted that Indiana would give up a 3-pointer if it stayed in zone and on cue, Austin Hollins connected from distance to give the Gophers a 51-48 lead. But when you consider how Minnesota shot from the perimeter on the evening (a dismal 4-of-20) and how badly Indiana was beaten inside (40 points in the paint), you almost wonder if IU could have played more zone to try to pack things in and neutralize Mbakwe and Elliott Eliason, who came off the bench for seven points. “We weren’t physical enough. We didn’t create the first hit,” Crean said afterward. “There were just too many times that the shot went up and they were there before we were because we weren’t into their bodies. And we picked a bad night to do that.”

· On the physicality, Zeller and Watford: When Indiana is at its best, both Zeller and Christian Watford are rebounding on both ends, finishing through contact and drawing fouls at the rim. In IU’s wins at Ohio State and Michigan State, the Hoosiers received that type of play from both guys. Tuesday night was a different story as Zeller had several shots blocked on his way to the basket. Watford, one of IU’s most consistent players in Big Ten play, didn’t shoot a free throw and had just two rebounds. It was the first game since IU’s loss to Butler in which Watford didn’t finish in double figures. He also played a season-low 18 minutes because of foul issues. “Christian wasn’t a real factor in the game, unfortunately,” Crean said. “And the fouls definitely brought that to a head.”

· Hulls carries IU in first half, but can’t get free in second: Much of the credit for IU’s four-point halftime lead goes to Jordan Hulls, who hit 4-of-5 of his 3-point attempts in the first half and led all scorers with 14 points at the break. Hulls was finding the holes in Minnesota’s perimeter defense and exploiting one of the main deficiencies for Tubby Smith’s team: guarding the perimeter. But the second half was a different story as the defense tightened up on Hulls and he attempted just three shots. His only second half basket drew IU to within three at 76-73 with four seconds remaining. “He got the shots [in the first half] in movement, the shots were in spacing and movement,” Crean said. “Unfortunately he had to handle the ball a little too much for us in the second, he had to relieve pressure.” In his postgame comments, Hulls said his focus was on trying to rebounding and get stops defensively rather than scoring. “Obviously, they were playing me a lot tighter in the second half,” he said. “Maybe I could have been a little bit more aggressive. But it started on the defensive end and rebounding. I wasn’t too worried about my offense as long as we got defensive stops.”