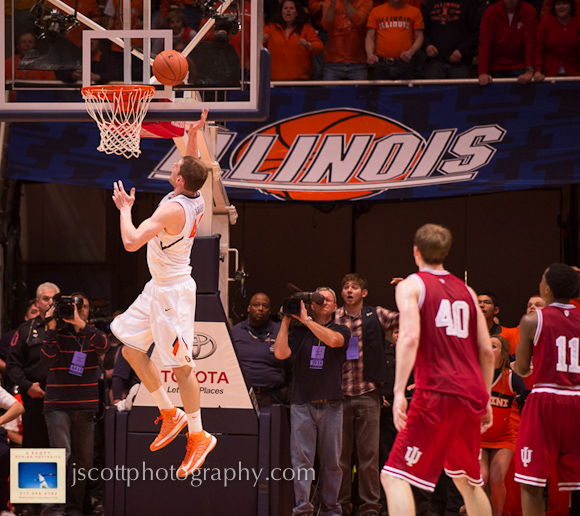 No. 1 Indiana was outscored 13-2 down the stretch Thursday night, so the game’s final play certainly wasn’t the only reason the Hoosiers fell 74-72 at Illinois. But since it was what ultimately ended the game, let’s take a closer look at the way Illinois scored the deciding two.

Brandon Paul, who had scored 21 points, took the ball out for the Illini with Victor Oladipo guarding him. Sam McLaurin lined up in the corner guarded by Cody Zeller. D.J. Richardson, who shot Illinois back into the game late, came off a high screen from Tyler Griffey and wound up well behind the 3-point line on the right wing. Richardson was initially guarded by Yogi Ferrell and Griffey by Christian Watford, but the Hoosiers switched on the screen. Joseph Bertrand was on the other side of the court, guarded by Will Sheehey.

After the initial screen didn’t produce any results, Richardson continued to move toward the right baseline and the inbounder, Paul. Watford attempted to follow Richardson. McLaurin, meanwhile, set a hard screen on Ferrell, and Griffey cut to the basket. But Zeller, who looked like he was supposed to switch with Ferrell after the McLaurin screen, didn’t follow Griffey.

“It was a broken play for them,” Indiana coach Tom Crean said afterward. “We were not going to give them a chance to set up and win the game on a lob. They were out of timeouts, we had two, I wouldn’t change that for a second, not calling a timeout there. We just didn’t communicate well. … Pressure of the moment a little bit.”

Added Zeller: “I guess it was just a miscommunication. I haven’t seen it yet.”

Hoosiers can’t put the game away

In the end, the Hoosiers lost on Thursday because of a bad defensive breakdown. But they would never have been in that situation if they had continued to execute offensively down the stretch like they had for much of the game. Indiana was so good offensively at times in the game that ESPN’s Seth Greenberg said the Hoosiers were “putting on an offensive clinic” during the halftime show.

But in the final few minutes, the Hoosiers didn’t have nearly as much success. They scored only seven points over the final six minutes, 46 seconds of the game, including just two points in the final 3:36.

“We didn’t stay with the movement that we wanted to have,” Crean said.

Defensively, it was a similar refrain: overhelping. Crean has preached against it a lot lately, and he said his team was guilty of it again against Illinois. When the Hoosiers overhelped in the second half, it left shooters — usually Richardson — open in the corners.

· Hollowell continues strong play: Despite the loss, freshman forward Jeremy Hollowell had another solid outing against Illinois and continues to play better as the season goes along. He had six points on two huge 3-pointers and two assists.

· Sheehey responds: After scoring only two points in Saturday’s win over then-No. 1 Michigan, sixth man Will Sheehey contributed 13 points on 6-of-11 shooting against the Illini. Most of Sheehey’s baskets came on layups or dunks created by good cuts. He was 0-of-3 from beyond the arc.