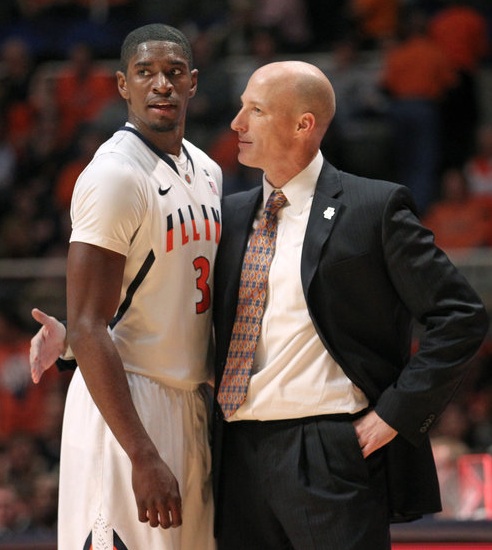 Indiana tips off a two-game roadtrip tomorrow evening when the Hoosiers travel to Assembly Hall for the first time since March of 2011 to take on Illinois. The Fighting Illini, once ranked No. 10 in the country, are just 2-7 in the Big Ten and have dropped three in a row.

The game will be broadcast on ESPN at 7:00 p.m. with Joe Tessitore and Sean Farnham on the call.

An Illinois season that once had great promise and the virtual certainty of a NCAA Tournament bid is quickly deteriorating to the point that non-conference wins at Gonzaga and over Butler on a neutral floor in Maui might not be enough to keep the Fighting Illini from missing out come Selection Sunday.

First-year coach John Groce, who came to Champaign after leading Ohio University to the Sweet 16 last spring, quickly won over Illinois fans with an 12-0 mark out of the gate. But the bottom has fallen out since that surprising start and the Illini have dropped four in a row at home and 8 of 11 overall. The slate doesn’t get any easier this week either as No. 1 Indiana comes to town followed by a road trip to Minneapolis to take on Minnesota.

The majority of the scoring for the Illini comes out of the backcourt and it starts with senior guard Brandon Paul, who averages 17.4 points and uses 29.8 percent of his team’s possessions. More than half of Paul’s field goal attempts have come from beyond the 3-point arc, but he’s also a threat to get to the foul line with a team-high free throw rate (FTA/FGA) of 49.8. While he’s hitting just 33 percent of his attempts from distance, he’s certainly capable of carrying Illinois with a hot shooting night.

Starting alongside Paul are sophomore Tracy Abrams and senior D.J. Richardson. Abrams is a below average shooter from the perimeter (28 percent on threes), and while he’s got a team-high 76 assists, his 66 turnovers are not the sign of a sound decision maker from the point guard position.

Richardson is unleashing even more 3-point attempts than Paul and connecting at a similar frequency (32.5 percent). As a team, 40.5 percent of the Illini’s field goal attempts come from behind the 3-point line, effectively making this group one that relies heavily on making threes to win games.

Sophomore Joseph Bertrand also plays significant minutes on the wing and is the team’s most effective defensive rebounder who can also finish around the basket. Bertrand is making 60.2 percent of his twos and is also shooting a team-best 35.7 percent on threes.

One glance at the Illinois frontcourt rotation paints a pretty clear picture on why this team is so reliant on the perimeter to win games. Sophomore Nnanna Egwu is the closest thing to a legitimate post presence on the roster, but is finishing just 44.7 percent of his twos despite standing 6-foot-11. Senior Tyler Griffey is taking more than half of his field goal attempts from beyond the 3-point line and Sam McLaurin, another senior, is a decent offensive rebounder who doesn’t provide much else.

Illinois has been below average on both ends of the floor since the start of Big Ten play, scoring just .98 points per possession and allowing conference opponents to score 1.07 points per trip. Given their reliance on the 3-point shot and how poorly the Illini are shooting in league play, it shouldn’t be particularly surprising that the offense is sputtering below a point per possession. Illinois sports a league-worst 25.4 percent on threes in nine conference games.

Overall, the rest of the Illinois offensive profile is generally average. The Illini are in the upper half in terms of offensive rebounding percentage, are second in two-point field goal percentage, seventh in turnover percentage and are second to last in terms of getting to the free throw line.

Indiana has three major areas of weakness that it should look to exploit on the Illinois defense:

· Indiana is the Big Ten’s best at getting to the foul line and the Illini are eleventh in terms of sending their opponents to the line.

· The Hoosiers are also the league’s best offensive rebounding team and Illinois is below average (33.5 DR%) on the defensive boards.

· Indiana is setting the Big Ten pace from behind the 3-point line (42.1 percent) and Illinois is allowing Big Ten opponents to connect on 37.2 percent of 3-point attempts.

Given the free fall from No. 10 in the Associated Press top 25 poll to the NCAA Tournament bubble, a shot at the nation’s No. 1 team is a major opportunity for Illinois to reverse course from its current path. Indiana enters as the Big Ten’s only unbeaten road team and playing its best stretch of basketball of the season to-date.

What will be interesting to watch is how Illinois approaches the pace of this game. The Illini are playing the third fastest tempo in Big Ten games, but attempting to run with Indiana is unlikely to yield favorable results. On the flip side, Illinois doesn’t exactly have the personnel to grind out a win in the half court against a team that has become elite defensively.

If Indiana can avoid the turnovers that can kill momentum, pound the offensive glass and continue its free throw parade, Illinois will have a major uphill battle in its quest for a third Big Ten win. Ken Pomeroy likes the Hoosiers to win 82-70 with an 82% chance of the Hoosiers remaining unbeaten away from Assembly Hall in true road games.