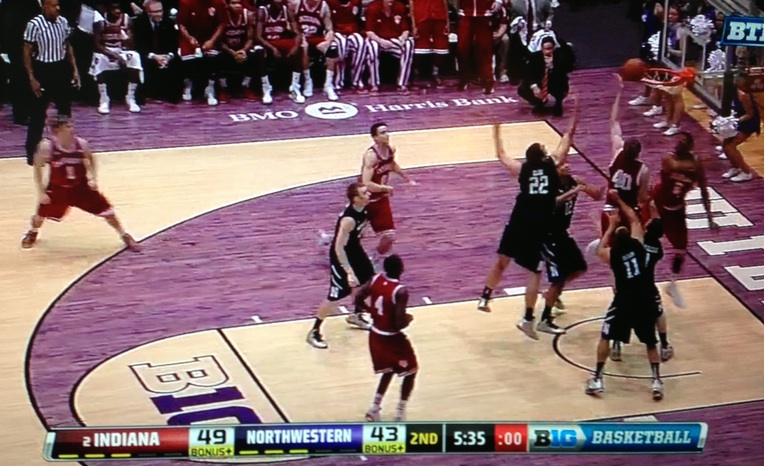 First things first. Indiana is 3-0 on the road in the Big Ten. While it’s easy to pick apart the mistakes this team has made in second halves, particularly in Big Ten play, it’s important to recognize this team is 16-2 overall and 4-1 in the country’s toughest conference.

Early on, Indiana established control despite not playing its best offensively for the first 20 minutes. That’s because the Hoosiers held the Wildcats to 7-of-23 shooting from the field in the first half. Besides Reggie Hearn, Northwestern barely showed up in the first half on its way to 17 points.

Christian Watford was a big reason why Indiana was able to open up a lead of as many as nine points less than six minutes in the game. The senior from Birmingham was hot early on, scoring seven of IU’s first nine points. It seems Indiana has been looking to get Watford going early in games and today was no exception. He finished with 11 points and four boards in the first half.

But with a 14-point at the half, the question looming in everybody’s mind was this: Would Indiana put Northwestern away or allow the Wildcats to claw their way back in?

It took a while to come to fruition as the Hoosiers led 45-29 with 11:09, but thanks to a 1-3-1 zone defense that Indiana couldn’t solve, Northwestern made a run. The lead dwindled all the way down to five at 47-42 at the 6:48 mark on a layup by Hearn and it became clear that Indiana would either answer the call or let this game go all the way down to the wire.

Fortunately for IU, Zeller was there to make a play, just as he did for most of the afternoon.

His layup with 6:20 to go stretched the lead back to seven and he followed that with an tip-in of a missed runner by Jordan Hulls to make the cushion nine points. Northwestern never got closer than five the rest of the way and Zeller finished with team-highs of 21 points and 13 rebounds.

· This was yet another game where Indiana got little from its bench. Besides six points from Will Sheehey, who Tom Crean predicted on the pregame show would have a big afternoon, the IU bench went scoreless. This will likely be a storyline until the bench has a breakout game, which has yet to happen in Big Ten play.

· Overall, it was a solid afternoon for Hulls. Despite struggling from the foul line (4-of-7), IU’s savvy senior finished with 15 points and knocked in a key jumper with 1:31 to go to push the lead back to seven.

· Watford, who was very good early, seemed to disappear for most of the second half. He finished with just three points and two rebounds after intermission as Northwestern slowly crawled back into the game.

· This was mentioned postgame on Twitter, but it bears repeating here: There has to be some concern with Indiana allowing Northwestern to hang around and eventually bring a 16-point second half lead all the way down to five. This was a game Indiana had a chance to push out to a bigger lead, but the Hoosiers just couldn’t finish the job and win the game running away. Eventually, letting teams hang around could end up costing IU an important game with Big Ten title and NCAA ramifications, so it bears watching how they finish games coming up over the next few weeks.