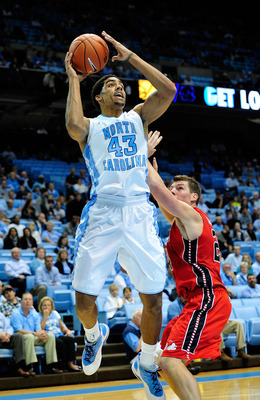 Ever since the Indiana schedule was released, Nov. 27 has been the date to circle in the non-conference schedule. Last week’s Legends Classic in Brooklyn was certainly a challenge for the No. 1 Hoosiers (6-0), but Tuesday’s Big Ten/ACC Challenge matchup with No. 13 North Carolina will likely be their biggest test prior to conference play.

The Tar Heels possess more athleticism than any team the Hoosiers have played to this point, and they bring an element to the game unlike any Indiana has seen during the Tom Crean era. At 9:30 p.m. Tuesday night, a track meet could well break out at Assembly Hall.

“I don’t know if we’ve ever seen a fast break come into Assembly Hall in our time here like we’re going to see,” Crean said Monday. “Their transition is literally second to none. It always is with Roy Williams teams. We saw it first-hand when we were at Marquette and he was at Kansas and we played in the Final Four. As hard as we prepared for it, it was unlike anything we’d seen. That’s the way that they are right now.”

North Carolina (5-1) loves to push the tempo whenever possible. The Tar Heels will certainly run on missed shots and turnovers, but they’re also plenty willing to go on the break off a make.

“We can’t celebrate a nice play because they’ll be scoring in two seconds on the other end,” sophomore Cody Zeller said.

There are several keys to the Carolina break. First, nearly everyone Williams puts on the floor is an offensive threat. The Tar Heels have seven players that average at least 7.3 points per game (though P.J. Hairston won’t play on Tuesday). Second, they space the floor very well, with shooters spotting up on both sides of the court. And finally, freshman guard Marcus Paige is exceptional at pushing the ball and finding the open man.

“Teams that aren’t committed to running run to the wings. They run to the corners,” Crean said. “And you have to guard them in the corners. It’s not like you can just go back and get in your normal help defense routine and roll against them, you’ve got to go get to the corners. Everybody on the break is a legitimate threat to score.”

The Hoosiers also excel in transition and love to play fast, which could make for an uptempo, high-scoring game. But while they want to play fast, the Hoosiers know they must focus on slowing North Carolina down on the defensive end.

The defensive focus will start with 6-foot-8 sophomore forward James Michael McAdoo, who earned co-MVP honors in the 2011 McDonalds All-American game. McAdoo is averaging 16.8 points and 8.8 rebounds per contest, leading the Tar Heels in both categories.

“McAdoo is as good of a rebounder — especially offensively — that these young men have seen this year or any other year,” Crean said.

Defending McAdoo will be even more difficult given the Hoosiers’ continued lack of frontcourt depth because of suspensions to Peter Jurkin and Hanner Mosquera-Perea and an injury to Derek Elston.

North Carolina’s only loss came against Butler (82-71) in the Maui Invitational last week. In that game, the Bulldogs — who Indiana will play on Dec. 15 — jumped out to a huge lead and withstood a furious Tar Heel rally.

Crean said he has not watched the tape of the entire game, but he has examined it in segments.

“Butler got off to a great start, they were very physical with them, and they made shots,” he said.

The Hoosiers will certainly try to do the same thing on Tuesday night, though quick starts haven’t been their strong suit so far this season.

· Short-handed Tar Heels: North Carolina will be without Hairston on Tuesday after the sophomore guard injured his left knee in practice on Sunday. Hairston, who is averaging 10.8 points per game this season, will not travel to Bloomington for the game.

· Weird playing Carolina?: During Zeller’s recruitment, North Carolina was in his final three. His older brother, Tyler, played there. Cody is plenty familiar with the Carolina coaching staff and its players. So what will it be like to play the Tar Heels?

“A lot of things have changed since even the last time I was down there,” Zeller said. “But I know them all really well. I have a lot of respect for the coaching staff. They’ve always treated me and Tyler really well. But at the end of the day, it’s just who can score the most points.”

· Elston’s recovery on schedule: Elston, a senior forward, has yet to play a game this season after having surgery for a torn meniscus in October. When asked about how Elston was progressing on Tuesday, Crean said he’s recovering at the rate expected.

“He’s right on schedule,” Crean said. “His attitude is great. It’s like having an extra coach out there. We expect to have him some time after Christmas.”