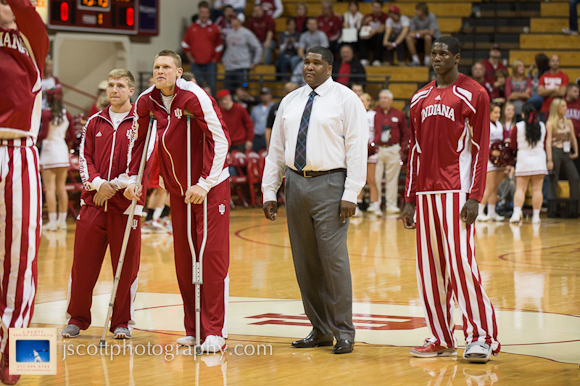 Early this evening, the NCAA and Indiana released separate press releases on the eligibility status of Peter Jurkin and Hanner Mosquera-Perea. The NCAA has ruled the players must each sit nine games and donate money to charity. (A link to applicable documents in this case.)

Calling Indiana University’s corrective actions “substantial and meaningful,” the NCAA on October 31, 2012, ac- cepted as secondary a case IU filed with it on June 22, 2012. In short, that case involves the provision of what would generally have been permissible expenses but for the provider’s donation of $185 to the IU Varsity Club between 1986 and 1992, rendering him forever a “booster” under NCAA rules, notwithstanding that the donations were minimal in nature and occurred over 20 years ago.

Because the NCAA permits prospective student-athletes to receive normal and reasonable living expenses from an individual with whom the student-athlete has an established relationship (such as a non-scholastic athletics team coach like in this case), most of the expenses in this matter would have been generally permissible had not the benefactor been deemed a “booster” based upon those dated, nominal Varsity Club donations. Since his last donation in 1992, twenty years ago, and more than 15 years before he first provided the expenses, the benefactor has made no additional financial contributions in support of Indiana University. The benefactor, Mark Adams, fully disclosed both his Varsity Club contributions and former student-athlete expenses at the time of the first eligibility determination in 2008 for Tijan Jobe, and he has completely cooperated with this review.

The institution was aware that Mr. Adams and his nonprofit organization had provided support to Mr. Perea and Mr. Jurkin, but believed such support was generally permissible pursuant to an NCAA June 6, 2000, interpretation, given Mr. Adams’ status as their nonscholastic coach and Mr. Perea’s apparent legal guardian. At the time, the institution did not believe Mr. Adams to be a representative of their athletics interests. From the summer of 2010 through April 2011, during the course of planning the recruitment of Mr. Perea and Mr. Jurkin, the institution’s compliance staff worked closely with the conference office, the NCAA AMA staff and NCAA enforcement basketball focusgroup staff regarding the relationship between Mr. Adams and the institu tion’s men’s basketball program and how to ensure the permissible recruitment of prospective student-athletes with ties to Mr. Adams’ nonscholastic team.

Despite the minimal nature of Mr. Adams’ donations, and the fact that the last donation he made was more than 15 years before he provided expenses to a prospective student-athlete who enrolled at the institution, Mr. Adams must be considered a represen tative of the institution’s athletics interests.

The NCAA Basketball Focus Group worked with Indiana University staff to review the interaction between the men’s basketball program and Adams, A-HOPE, and Indiana Elite and have found no impermissible access or additional basis to further establish Adams as a representa- tive of Indiana University’s athletics interests.

“This matter was discovered internally and promptly reported to the NCAA,” said Fred Glass, Indiana University Vice President and Direc- tor of Intercollegiate Athletics. “At the NCAA’s direction, we conducted an extensive and thorough review in cooperation and consultation with the NCAA Basketball Focus Group. While I am very disappointed with these circumstances, I am very pleased with the way we have responded and appreciative of the NCAA’s professional guidance and assistance. I would also like to thank Mark Adams for his forthright candor and cooperation in this matter.”

After the completion of the internal review in consultation with the NCAA Basketball Focus Group, Indiana University self-imposed the following penalties and corrective actions as part of its June 22, 2012, self-report: a $5,000 fine (based upon the NCAA’s established formula for a failure to properly certify a student-athlete); a one-year suspension of the benefactor’s communication with the men’s basketball coaching staff; and completion of the NCAA Student-Athlete Reinstatement process for the two incoming student-athletes, Hanner Perea and Peter Jurkin. Again, the NCAA later characterized these actions as “substantial and meaningful.”

On July 27, 2012 Indiana University filed with the NCAA requests for reinstatement of student-athlete eligibility for Peter Jurkin and Hanner Perea. Indiana University proposed that, based on the totality of these rather unusual circumstances, each student-athlete should be immediately reinstated (that is, without being withheld from any games) and that Jurkin should repay $250 of his reportedly $6,000 in impermissible expenses and Perea $1,238.69 of his approximately $8,000 in impermissible expenses. These expenses included food, clothing, housing, travel, toiletries, a cell phone, a laptop, and other miscellaneous items. On October 29, 2012, after receiving the final set of requested facts from the university the previous week, the NCAA reinstatement staff issued its initial decision that it was requiring Jurkin to repay $250 and Perea to repay $1,588.69 and that they each be withheld from the first nine games of this basketball season. The university then submitted additional information for consideration on the evening of November 1, 2012. After thoroughly reviewing the new information, the NCAA reinstatement staff issued its reconsideration decision the next day confirming its initial decision. Their written decision was received by Indiana University on November 6, 2012. This week Indiana University will file with the Student Athlete Reinstatement Committee its appeal of the staff’s action as to the number of games from which the student-athletes are to be withheld.

IU’s June 22, 2012 Self-Report for Secondary Violations and the NCAA’s October 31, 2012 acceptance letter thereof are attached to this release.

And here’s the NCAA’s:

While in high school, Jurkin and Perea accepted approximately $6,000 and $8,000, respectively, in impermissible benefits from an Indiana University booster. These benefits included plane tickets, meals, housing, a laptop, cell phone and clothing. Jurkin will be required to repay $250 to a charity of his choice. Perea must repay approximately $1,590 to charity. In determining the amount of repayment, the staff considered the mitigation presented by the university.

Indiana University was aware starting in April 2011 that there could be eligibility issues for these student-athletes should they enroll at the school. The university submitted its student-athlete reinstatement requests on July 27, 2012. The NCAA reinstatement staff issued its decision on October 29, 2012, after receiving the final set of requested facts from the university the previous week.

We’ll have much more on this tonight.