Around the Big Ten: Izzo unhappy with frontcourt play 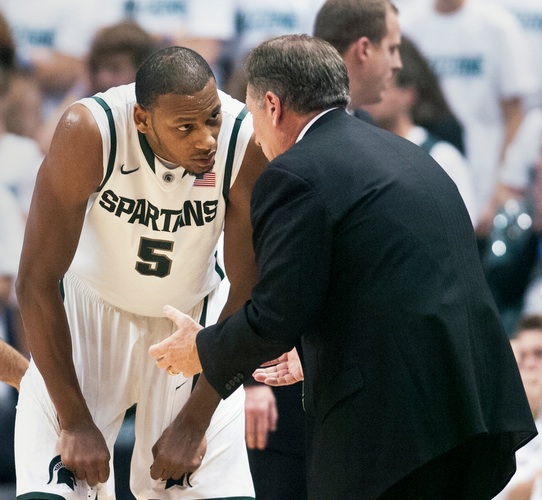 With the start of the regular season just four days away, Inside the Hall takes you around the Big Ten for the latest on IU’s conference foes:

· Illinois: Sophomore guard Tracy Abrams led four players in double figures as the Illini beat West Chester 75-66 in an exhibition game Sunday afternoon. The good news is Illinois won the game. The bad news? They were outscored 46-31 in the second half. Based on first year coach John Groce’s postgame comments, it sounds like Brandon Paul may be the team’s sixth man with Abrams, Joseph Bertrand, D.J. Richardson, Sam McLaurin and Nnanna Egwu as the starters. Paul had five turnovers on Sunday.

· Iowa: The Hawkeyes also had their final exhibition tune-up on Sunday, beating Quincy University 100-54 at Carver Hawkeye Arena. Freshman guard Mike Gesell scored 18 points and Iowa forced 31 turnovers. Gesell, along with Aaron White, Adam Woodbury, Zach McCabe and Roy Devyn Marble, started for Fran McCaffery. Afterward, McCaffery said the Hawkeyes will likely stick with that lineup to begin the season which means Eric May, Melsahn Basabe and Josh Oglesby will all come off the bench.

· Michigan: The big news coming out of Ann Arbor last week was the suspension of sophomore guard Trey Burke for the team’s first exhibition game against Northern Michigan. The Wolverines rolled without Burke in the lineup as the heralded freshman class played 99 minutes and guard Spike Albrecht had 16 points. Michigan’s final exhibition game is tonight against Saginaw Valley State and Burke is expected to return.

· Michigan State: Tom Izzo was none too pleased following the Spartans’ 62-49 exhibition win over St. Cloud State on Friday night. The major problem right now for Michigan State appears to be finding the right frontcourt combination and it appears that Derrick Nix and Adreian Payne will not play much together to start the season. Sophomore Branden Dawson also drew some criticism from Izzo, according to this update from MLive.com.

· Minnesota: Like Michigan, the Golden Gophers will conclude their exhibition schedule tonight. In the team’s first exhibition, Tubby Smith went with the same starting lineup he used last season. How long that lineup sticks, however, is up for debate as Trevor Mbakwe and Mo Walker are both back from knee injuries. Minnesota also made the final eight for the No. 1 player in the 2014 class, point guard Tyus Jones, who is from nearby Apple Valley.

· Nebraska: The Tim Miles era has yet to officially get underway in Lincoln as the Cornhuskers have yet to play an exhibition game and won’t do so until Wednesday night when they host Midland University. The first KenPom ratings had Nebraska all the way down at No. 216 nationally as every other team in the league was ranked in the top 90.

· Northwestern: The Wildcats have also yet to play a public exhibition, but will host Chicago on Wednesday at Welsh-Ryan Arena. Guard Tre Demps has emerged as a potential starter for Bill Carmody after missing most of last season with a shoulder injury and that’s a good thing for Northwestern. The team will have to replace the production of Jershon Cobb, who is suspended for the season.

· Ohio State: The Buckeyes will play on a big stage to open the season as they get Marquette in Friday’s Carrier Classic in Charlestown, South Carolina. One thing to watch for early with Ohio State is a two point guard lineup with Aaron Craft and Shannon Scott, which Thad Matta has been pleased with thus far.

· Penn State: Tim Frazier picked up right where he left off a season ago on Saturday afternoon with 17 points and eight assists as the Nittany Lions coasted past Philadelphia, 79-54. But beyond Frazier, who is going to step up for second year coach Pat Chambers? Redshirt sophomores Jon Graham (16 points) and D.J. Newbill (15 points) look like the best candidates following the exhibition.

· Purdue: The Boilermakers received a scare from Division II runner-up Montevallo on Oct. 30, but 24 points from Terone Johnson were enough to prevail, 70-61. Purdue followed the Montevallo win up with a comfortable 109-68 drubbing of Newberry on Saturday night. Johnson again led Purdue in scoring and looks to be the No. 1 option offensively heading into Friday’s season opener against Bucknell at Mackey Arena.

· Wisconsin: Two key injuries are the major storyline in Madison thus far as Josh Gasser, the expected starter at point guard, is out for the year with a torn ACL and Mike Bruesewitz continues to recover from a leg laceration. The loss of Gasser was a tough blow, but Bo Ryan appears to have options with George Marshall, Traevon Jackson and maybe even Ben Brust. It won’t take long to learn what the Badgers are made of as they travel to Gainesville for a meeting with Florida on Nov. 14.