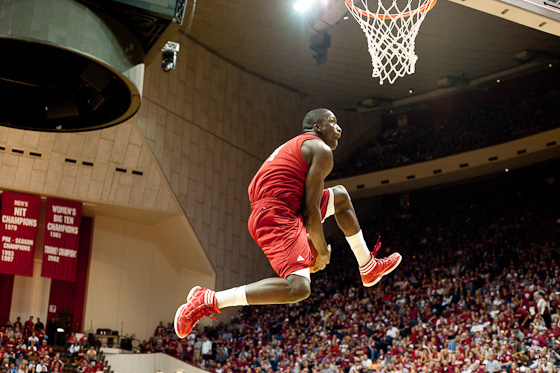 The Big Ten and ESPN announced the television schedule and tip times for the upcoming conference basketball season earlier today.

Indiana will play a total of eight (with an option for nine) conference games on ESPN or CBS with the rest airing on the Big Ten Network.

ESPN’s family of networks will carry six Indiana games, highlighted by a February 2nd, 9 p.m. game with Michigan, which will be a part of ESPN’s College GameDay.

In addition to the Big Ten schedule, Indiana also announced tip times and television information for non-conference games. Indiana’s game against Butler in the Crossroads Classic on Saturday, Dec. 15 will be on CBS and a home meeting with Florida Atlantic on Friday, Dec. 21 will air on ESPN2.

“We always want our games to be seen in as many households as possible,” Tom Crean said in a release.  “I thought many of our games last year were among the best in the country and we are excited to have the opportunity to show the nation the energy our fans generate in Assembly Hall.”

You can view Indiana’s complete 2012-13 schedule, now with television information and tip times, on our schedule page.