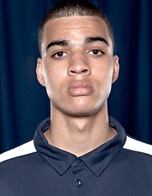 Indiana coach Tom Crean and his staff continued to stay busy during the fall recruiting period as they visited 2014 recruit Obi Enechionyia at St. James (Md.) on Friday.

Crean and assistant coaches Steve McClain and Kenny Johnson watched the 6-foot-9 Enechionyia work out, and then offered him a scholarship afterward.

Enechionyia said Indiana just “started texting me and sending me letters” at the beginning of September, so he was surprised to receive an offer so quickly.

“I’m pretty excited about it,” he told Inside the Hall. “I wasn’t really expecting it, but it was pretty cool. I think they’re ranked No. 1, right? It doesn’t get much better than that.

“They’re obviously pretty high up there right now. I’m just working on my game trying to see how many schools I can get interested now.”

Enechionyia, a four-star prospect according to Scout.com, can play both inside and on the perimeter.

He also has offers from Maryland, Massachusetts, Miami (Fl.), Xavier and VCU.

Enechionyia said he plans to take “several” visits, and he said he likely won’t decide until next fall.

“I don’t really have any favorites right now,” he said.