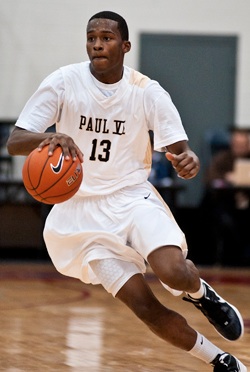 Two of the major recruiting services — ESPN.com and Scout.com — have updated their national rankings in recent days and several Indiana commitments and targets were shuffled up and down the respective lists.

Stanford Robinson, Indiana’s highest ranked recruit in the 2013 class, moved from No. 54 on Scout to No. 56 and remained a four-star prospect. Robinson rose five spots from No. 60 to No. 55 on ESPN and kept his four-star status.

Luke Fischer, who by most accounts had a very productive summer, fell from No. 74 on Scout to unranked in the top 100 and from No. 92 on ESPN to unranked.

Both Collin Hartman and Devin Davis remained three-star prospects by both services and outside of the top 100.

Indiana’s lone commitment in the 2014 class, James Blackmon Jr., fell from No. 31 overall on ESPN to No. 41. The 2013 and 2014 recruiting boards have both been updated to reflect the new rankings.

The latest is Florida Atlantic, which will visit Assembly Hall on Dec. 21 according to the school’s athletics site.

The Owls, a member of the Sun Belt conference, are coached by Mike Jarvis and finished 11-19 last season.

Assistant coach Peter Gash served as a graduate assistant at Indiana during the 2008-2009, Tom Crean’s first in Bloomington.

· New offers: 2014 Park Tudor wing Trevon Bluiett added an offer from Iowa earlier this week according to Kyle Neddenriep of The Indianpolis Star.