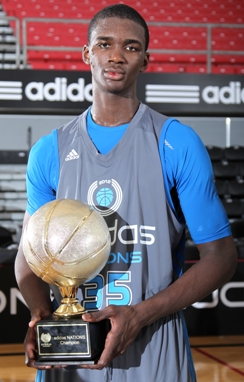 Vonleh was named a Co-MVP of the championship game along with Emmanuel Mudiay.

Statistically, Vonleh was the top player over the four day event as he averaged 19.3 points, 11.0 rebounds, 2.2 steals and 1.3 assists in five games.

The 6-foot-8 power forward, a consensus top five player nationally, told Inside the Hall in July that Indiana, Louisville, Kentucky and Ohio State are the four schools contacting him via phone and text most frequently.

All three have taken unofficial visits to Bloomington.

In the consolation game, 2014 IU commit Trey Lyles scored seven points and pulled down eight rebounds to help lead USA Blue 2014 to an 82-62 win over Australia.

Yarbrough: 4.5 points, 1.5 rebounds, 1.5 assists and one steal per game. Shot 37.5 percent from the field and hit both of his free throws attempted.