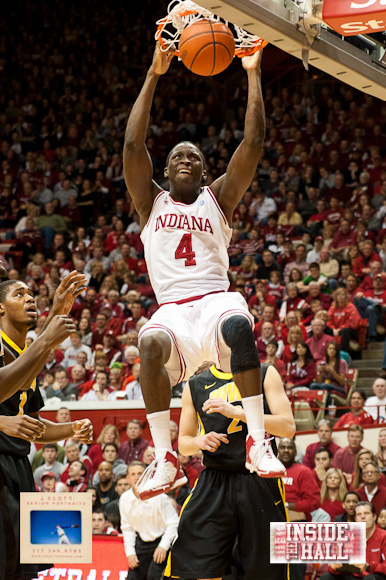 The power rankings have been on hiatus since the conclusion of the Big Ten season, but it’s time for an early look at the 2012-2013 conference race.

Here’s our look at the conference pecking order with the official start of practice just over ten weeks away:

12. Nebraska… Tim Miles left Colorado State for a rebuilding job in Lincoln and staying out of the conference cellar in year one will be an uphill battle. In its first Big Ten season, Nebraska had the worst offense in the league and the Cornhukers closed the season losing nine of their final ten games. With just one starter returning, it could be another long year.

11. Penn State… Nobody in the league used more possessions than Tim Frazier last season and that trend is expected to continue this winter in State College. D.J. Newbill, a former Conference USA All-Freshman season selection at Southern Miss, will join Frazier in the backcourt, but the Nittany Lions are still too thin in the front court to contend.

10. Northwestern… Is this the year Bill Carmody finally delivers an NCAA Tournament appearance? Probably not. John Shurna is gone and while Drew Crawford is one of the league’s most underrated players, Northwestern must improve its defense, which was the Big Ten’s worst a year ago.

9. Illinois… New coach John Groce will deliver a much needed change of leadership and direction, but that doesn’t mask the personnel question marks in Champaign. Plenty of talent and experience returns like Brandon Paul, D.J. Richardson and Tracy Abrams, but the Illini were awful from the perimeter (30.4 percent) last season and their front court depth is extremely thin.

8. Iowa… There’s plenty to be excited about for Fran McCaffery as he enters his third season. The loss of Matt Gatens hurts, but nearly everyone else returns (most notably Roy Devyn Marble, Aaron White and Melsahn Basabe) and the Hawkeyes add a pair of top 100 recruits in Adam Woodbury and Mike Gesell. Iowa could be a sleeper for an NCAA Tournament bid.

7. Purdue… No Robbie Hummel and Lewis Jackson means that other Boilermakers must step to the forefront and that charge will be led by D.J. Byrd and Terone Johnson. Matt Painter’s stellar recruiting class that includes point guard Ronnie Johnson, center A.J. Hammons and wing Raphael Davis should get the opportunity to contribute early.

6. Minnesota… After crumbling down the stretch of last year’s Big Ten schedule, the Golden Gophers regrouped to reach the NIT finals, where they fell to Stanford. Ralph Sampson is the only notable departure, but the return of Trevor Mbakwe should boost Tubby Smith into the top half of the league and a return to the NCAA Tournament.

5. Wisconsin… The loss of Jordan Taylor is significant, but Bo Ryan will once again find a way to win games with defense and dictating tempo. Four Badger starters return and freshman wing Sam Dekker, a McDonald’s All-American snub, will slide right into the rotation and play a major role.

4. Michigan State… The Spartans appeared headed for another Final Four berth last March before being derailed by Louisville in the Sweet 16. Despite the loss of Big Ten player of the year Draymond Green, Tom Izzo returns a solid nucleus that includes Keith Appling, Branden Dawson and Derrick Nix and also adds a McDonald’s All-American in Gary Harris. Defense (No. 3 nationally last season) will once again be the staple in East Lansing.

3. Michigan… The Wolverines surprisingly won a share of the Big Ten title last season and Trey Burke’s decision to return for his sophomore season puts them right back in the conversation for another crown. Stu Douglass and Zack Novak are both gone, as is Evan Smotrycz, but John Beilein brings in his best recruiting haul to-date headlined by Mitch McGary and Glenn Robinson III. The wildcard is the whether or not Tim Hardaway Jr. can return to the form he displayed as a freshman.

2. Ohio State… Perhaps placing the Buckeyes this high is a leap of faith, but the lofty ranking is predicated on last year’s freshman class making a much bigger impact in season two. Thad Matta always plays a small rotation and as such, Shannon Scott, Amir Williams, Sam Thompson and LaQuinton Ross each had limited roles. The return of Aaron Craft, Deshaun Thomas and Lenzelle Smith paired with the 2011 group should make Ohio State a contender once again.

1. Indiana… The Hoosiers return five of their top six players and add a McDonald’s All-American in Yogi Ferrell, who should be one of the top point guards in the league from day one. Indiana should once again have the Big Ten’s best offense with Cody Zeller leading the way in the paint, Jordan Hulls and Christian Watford on the perimeter and Victor Oladipo and Will Sheehey slashing from the wing. The defense must continue to improve, but few teams in the conference will have the firepower to keep up with IU’s efficiency and depth on offense.