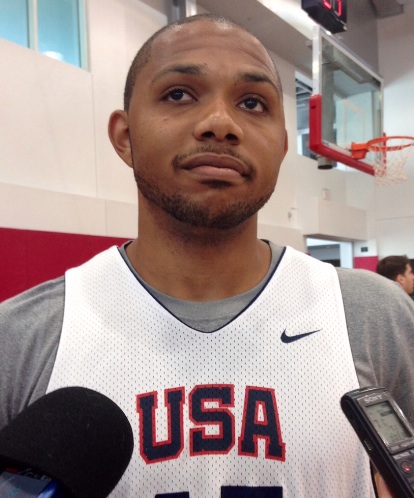 The 12-man roster that will represent the United States at the 2012 Olympics in London was announced Saturday night and former Indiana guard Eric Gordon missed the final cut.

USA Basketball began training on Friday in Las Vegas and went through two workouts before the final roster was announced.

Andre Igoudala, Blake Griffin and James Harden made the cut and Gordon, Anthony Davis and Rudy Gay were left off the roster.

Gordon, who has agreed to sign an offer sheet with the Phoenix Suns on Wednesday for four years and $58 million, reiterated on Friday in Las Vegas that he’ll be disappointed if the New Orleans Hornets decide to match the offer:

“As for now, I don’t know what’s going on. (If the Hornets match) as of right now, I’d be disappointed.”

As a restricted free agent, the Hornets wil have three days to match Gordon’s offer sheet from Phoenix and retain him.

New Orleans offered Gordon a four-year extension last January when the franchise was still owned by the NBA, but he rejected the offer.