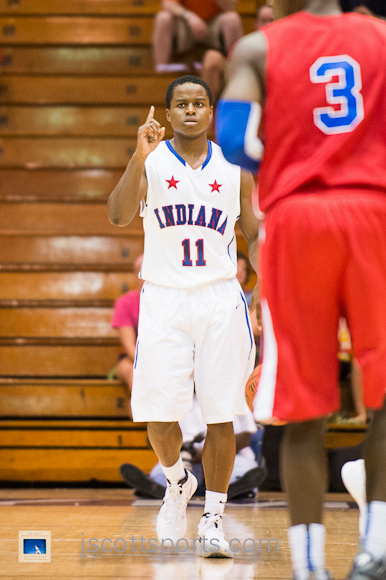 The 13-man Indiana roster features 13 Division I signees, nine of which will attend high-major programs.

The 12-man Kentucky roster, by comparison, has just four Division I signees.

But for most of the second half, the talent discrepancy didn’t seem to matter as Kentucky led for several possessions in the final ten minutes.

And just as the Kentucky All-Stars seemed poised to take a lead after R.J. Hunter missed a pair of free throws with 24.7 seconds remaining, Yogi Ferrell made a play.

With his team clinging to an 86-85 lead, Ferrell intercepted a pass from Kentucky’s Adam Wing which led to a transition dunk by Glenn Robinson III to give the Indiana All-Stars an 88-85 cushion.

“I forget who else was down there, but they came up to the ball, so I knew he was going to pass that down. He had no other option,” Ferrell said Wing’s pass that he was able to intercept. “I just ran down the floor as quick as I could. I figured he’d pass it and I just stole it.”

Kentucky could only manage an off balance 3-point attempt from Alan Stenzel in the final seconds and two subsequent free throws by Hunter with 1.3 seconds left sealed a 90-85 win for Indiana.

With a narrow win in Kentucky’s home court under their belt, Ferrell said he and his teammates must defend better on Saturday night when the series shifts to Bankers Life Fieldhouse in Indianapolis.

“We can pretty much score really well on the offensive end,” IU’s future point guard said. “But if we’re just trading baskets, it’s just going to come down to the wire like it did tonight. We just have to play better defense.”

Harris, who will play at Michigan State next winter, believes a more complete performance is on tap for Saturday.

“We knew it was going to be a battle coming in here,” Harris said. “We got up and we made it a lot tougher on ourselves than it could have been.”