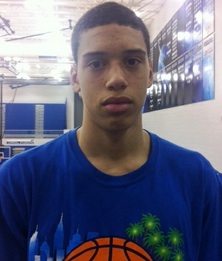 The list of suitors for 2015 Sexton (MI) forward Trevor Manuel is still growing.

His stellar play this spring led to ESPN.com recently listing him as the No. 24 overall prospect in his class.

Manuel’s frame coupled with his athleticism, ability to run the floor and wingspan have drawn the attention of Indiana, who scouted him at the Nike Spring Showdown this spring in Merrillville, and most of the Big Ten.

The visit to Bloomington last fall left a favorable impression on Manuel, who said he’s also received several letters from the IU staff.

“It was a good visit,” Manuel said earlier this month at the Bill Hensley Memorial Run-N-Slam in Fort Wayne. “Nice campus, nice people around. Good environment.”

Besides the Big Ten interest and early offers, Manuel says he is also hearing from several MAC schools and recent reports indicate that Louisville and Kentucky are also beginning to show interest.

For now, Manuel is focused on the remainder of the AAU season with his Meanstreets teammates and getting stronger finishing around the basket.

“I’ve been doing really good getting to the basket, working on my burst and stuff,” he said.