Q & A: 2013 commit Collin Hartman at adidas May Classic 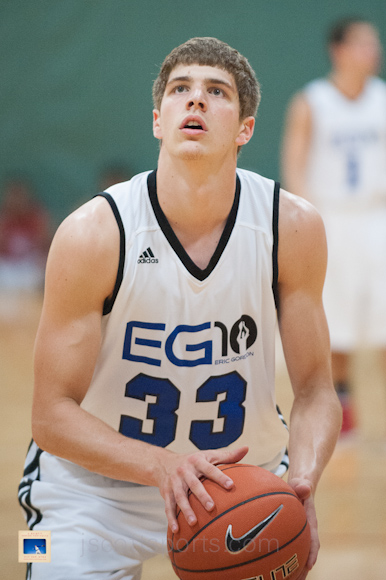 It’s been a tough start to the spring AAU season for 2013 IU commit Collin Hartman as the Eric Gordon All-Stars forward was forced to miss the adidas Spring Classic two weeks ago following an injury sustained at the Nike Spring Showdown in Merrillville.

The 6-foot-7 Hartman returned to the court this past weekend at the adidas May Classic and hit two clutch free throws with 13.4 seconds remaining in the Eric Gordon All-Stars 73-70 win over Louisville Magic in the Gold Bracket Championship.

Here’s a transcript of Hartman’s comments to an assembled group of media following a pool play loss on Saturday afternoon:

On how he’s feeling physically after missing the adidas Spring Classic two weeks ago:

“Two weeks ago, I had a concussion after the tournament we played in at the Fieldhouse (in Merrillville). I’m good now, 100 percent. Back is good, ankles are good, everything’s good.”

On how he got the concussion:

“I chested up on a guy and he turned and his me with an elbow. He broke my nose and I blacked out for a few seconds and came back in the game five minutes later, finished the game and went to the doctor and he said I had a concussion. I was out of school for a week.”

On how long it took him to feel like himself again after that injury:

“The most annoying thing was kind of forgetting everything. But now I’m 100 percent and it kind of feels good to be able to work out again because when you have a concussion, you can’t workout, you’ve gotta just lay low. And I think that’s the best part is getting back into things and not feeling kind of left out.”

On what he feels like he needs to work on this spring and summer:

“Just getting bigger, stronger, faster. Being able to play every position and guard every position. Just developing the physicality to it that’s going to get me to the next level.”

On how he’s developing physically:

“I don’t feel like I’ve bulked up, but I feel like I’ve toned up. I haven’t been to lift. It’s been like five weeks since I’ve lifted because I’ve been gone and traveling, but I’m back in and lifting (as of last week), starting to feel good. My body’s adjusting, I’m a little sore, but it just comes with it.”

On how beneficial the trip to Germany with Team USA was last month:

“It was good to meet guys all around our country that we were playing with and just hang out with them and see the different styles of play that people play with. In Germany, it’s crazy how they play over there. You can hop step and then euro around somebody and I just kind of waited for the whistle and it never came. It’s a whole other world over there. It’s a new experience to see what everybody else is like … how much stronger and bigger they are than us. It just opens your eyes to what you need to get yourself to if you’re going to go to that next level.”

On how the team did on the Germany trip:

“They were all like a year and a half older than us and we just met each other when we landed in Dallas. That was the first time we’d met each other. We had like four practices before our first game. I felt like we adjusted pretty well to it for just meeting each other. At that point, it’s just basketball IQ and being unselfish.”

On what he learned basketball wise on the trip that he can apply to his game:

“Just the physicality, being able to use your body and get into people. Because they do that very well over there. It’s a physical game and you have to get knocked down to get the foul. But using your body and that kind stuff, that’s what I’ve taken from it.”

On the development on his AAU teammate and future IU teammate, Devin Davis:

“He’s gotten a lot stronger, he’s developed his jump shot a lot. He can jump out of the gym, he’s got the lankiest arms I’ve ever seen. He’s really improved. He’s really gotten stronger, being able to guard people better and shoot off the 3.”

On how often he and Devin Davis talk about their future:

On what the IU staff tells him about where he needs to improve: