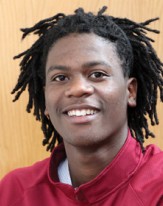 Over the last month, Indiana has been tracking Indian Hills C.C. (IA) forward Jameel McKay closely and the Hoosiers offered a scholarship to the JUCO All-American after a workout last week. It was Indiana’s second trip to watch McKay in less than a week.

Inside the Hall talked at length with McKay about his interest in the IU program, his thoughts on Tom Crean, his evolving game, his recruitment and much more:

On what Indiana believes he can bring to the program:

“Right now they’re interested in me coming in and playing right away. Bringing the same type of game play that I bring right now to my team and help bring another banner to the program.”

On his familiarity with Crean from his time at Marquette and how that factors in to his interest:

On how he viewed the resurgence of the Indiana program this past season:

“He [Coach Crean] had to have a good vision. Because he left Marquette at a point where Marquette was really good. They had some good players returning. It just takes a process when you’re trying to start over with a new program. He got players to listen and got some of the players he wanted. This year he’s got one of the top recruiting classes coming in so Indiana’s back.”

On the strengths of his game:

“My strength is when I’m facing up with the ball. I can play multiple positions and I bring a lot of energy to the game. I’m very versatile and can score in different ways. I’m a very good offensive rebounder. I got a nose for where the ball is going to go off of rebounds.”

On what makes a great offensive rebounder:

“As long as you go [to the glass], you’re going to get rebounds. As long as you go. Everybody doesn’t go. It’s so hard to keep a box out and keep a body on somebody at all times. I figure if I just go, I can get a lot [of rebounds]. A lot of times I just go with my length.”

On areas of improvement for his game:

“Last year I guarded every position on the court. It was mostly point guards because I was on top of the press. I think that’s why a lot of schools like me because I can guard multiple positions. This year I played well against point guards. I want to get my off-the-ball defense a lot better and my on-the-ball defense a lot better. I’m still developing that. And just getting stronger. This past year the biggest difference for me was strength. I still had a good year, but I’ve just gotta get stronger. I know if I get stronger, the game will become a lot easier.”

On setting up an unofficial visit to Bloomington:

On the timetable for his recruitment and a decision:

On the list of schools involved in his recruitment:

On whether or not any schools stand out:

“All schools are equal at this moment because I haven’t had a lot of time to just think about it. I wouldn’t put anyone ahead. But what I can say about Indiana is them showing up two times this week, that did show me how much of a priority I am for them and that they really are interested in me.”