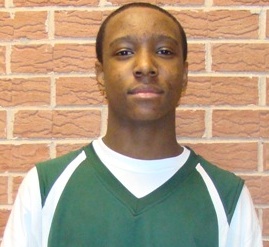 The upcoming spring evaluation period should lend additional insight into the prospects the Indiana staff is interested in, but one 2015 point guard with established Hoosier interest is East Chicago Central’s Hyron Edwards.

Edwards, who is playing for Mark Adams and Indiana Elite Team Indiana this spring and summer, was among the visitors last October at Hoosier Hysteria and has also visited Michigan, Northwestern and Purdue.

The 5-foot-10 sophomore-to-be averaged 14 points and eight assists per game in his first high school season and talked to Inside the Hall about his recruitment thus far at the IndyBall.com Shootout in Indianapolis:

(Update: Indiana has extended a scholarship offer to Edwards.)

How did your freshman season at East Chicago Central go?

“It went well, we started off strong. With me at point guard, I had to distribute the ball, to my teammates and to all the shooters, but it went well.

What was the experience like playing big varsity minutes as a freshman?

“The experience was tremendous, because I had to work every game and every practice because everyone was bigger than me and stronger than me, so I just hit the weights everyday. It was tremendous, though. I like playing and the competition.”

What was the toughest matchup of the high school season for you?

“The toughest one was Lake Central and Glenn Robinson (knocked out East Chicago Central in sectional).”

What schools have been recruiting you?

Who have you been in touch with from IU?

“I would describe myself as a true point guard, I play both sides of the floor, offense and defense and I like to help my team get better all-around.”

What’s something you would like to see yourself improve on over the summer?

“My strength, going to the hole more and my shot.”