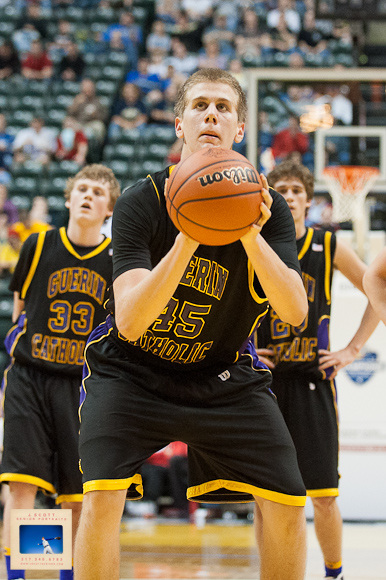 Aaron Brennan burst onto the recruiting radar of several Big Ten programs as a sophomore by averaging 17.3 points, 7.3 rebounds and 2.4 blocked shots for Class 3A state champion Guerin Catholic.

Inside the Hall talked to the 6-foot-6 class of 2014 forward about Guerin’s state tournament run, the schools he’s hearing from and his thoughts on Indiana and much more:

On the team chemistry at Guerin Catholic:

“I felt like we had a team where we all really liked each other. That’s really hard to get. We all hung out with each other off the court. We knew each other growing up. Our point guard I played with him since third grade, his brother was on the team. We practiced every day really hard and our JV team was really good, too. They were always pushing us every day in practice so we were mentally and physically prepared to go into the tournament.”

On the toughest part about winning a state championship:

On where his game improved the most during the season:

“I improved my outside game a lot more. I played JV last year for the most part, but I filled in for our center last year and I was a little bit heavier last year, too. This year I lost about 20 pounds and I worked on my shot. I played a small forward type role so I could get on the perimeter, too. I feel like that’s my most improved area.”

On the strengths and weaknesses:

“I’m big enough where I can go down low. I’ve been a post player for most of my life so I have post moves. I feel like I can take people off the dribble and shoot. On defense, I feel like I’m better in the post. I need to work on my perimeter defense, being quicker on my feet. I need to move my feet more.”

On the atmosphere at Assembly Hall during an unofficial visit:

“It was crazy. Growing up in Indiana, IU basketball, you can’t really describe it to someone else because they just don’t know. I thought it was a crazy atmosphere, everyone was enjoying the game. The players on the bench, even if they didn’t get in, they’re cheering their teammates on. It seemed like a really cool place to play.”

On the schools showing interest:

On what college coaches say they like about his game:

“They say they think I have a lot of potential and that I’m coach-able.”