Disappointment aside, Hoosiers look ahead to Sunday 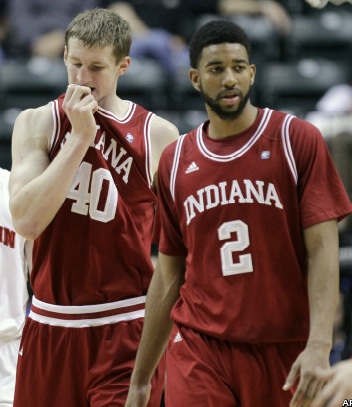 The facial expressions were long in the Indiana locker room following the Hoosiers’ 79-71 loss to Wisconsin in the quarterfinals of the 2012 Big Ten Tournament.

IU expected to beat the Badgers for the first time since 2007 after winning their previous five games by an average of 16.2 points.

Disappointment was the natural way to react.

But buried underneath the emotion of the loss they’d experienced just minutes earlier were words of optimism from a team that’s a lock to be selected for the NCAA Tournament.

“It’s why we all came here. It’s why we all fought through the ups and downs,” Indiana guard Matt Roth said. “A lot of good things happened to us this year. We were able to face the adversity that came about and we really handled it well.”

The adversity Roth speaks of pops up over the course of the season in programs across the country. The difference in this turnaround season for Indiana is that the Hoosiers, as Roth said, have met the adversity each time and improved on the other side of it.

After losing five of seven games from Jan. 12 to Feb. 1, Indiana rattled off eight wins in its final ten games.

In the previous three seasons, losses snowballed in February and the Hoosiers met the finish line of their season in the opening round of the Big Ten Tournament.

“Obviously three years of being in this locker room and the season’s over, it’s a different change,” Indiana forward Tom Pritchard said. “We’ve just gotta keep building on what we’re doing right, correct the mistakes and get ready for the NCAA Tournament.”

The fact that we’re even talking about Indiana as a lock to make the tournament is a sign the program is ahead of schedule in its road back to national prominence.

This team didn’t peak when it beat No. 1 Kentucky in early December or No. 2 Ohio State in late December. It continued to improve down the stretch and rather than wilting after dropping five of seven, the Hoosiers saved their best basketball for last.

Friday’s loss to Wisconsin, while disappointing, is just another moment of adversity for this group to overcome.

“It’s to the point now where we can’t really hang our heads,” Indiana forward Derek Elston said. “We know that we’re still playing basketball. We’ll see what happens Sunday and get right back in the gym.”

Victor Oladipo, who had one of his toughest games of the season with a 2-of-12 shooting performance, echoed the words of Elston with a brief, but spot on comment.

“It’s not over with. We’ve got something to look forward to now,” he said. “We haven’t had that in the past.”

What the Hoosiers have to look forward to is Sunday’s NCAA Tournament selection show, which will mean something in Bloomington for the first time since 2008. That’s exciting for Tom Crean, who delivered one of the best coaching jobs in the country after some questioned the program’s progress over his first three seasons.

“They’ve earned their way in,” Crean said. “There’s nobody that’s handed them anything. They weren’t anointed, the group, to go back to the NCAA Tournament. They really, really had to work.”