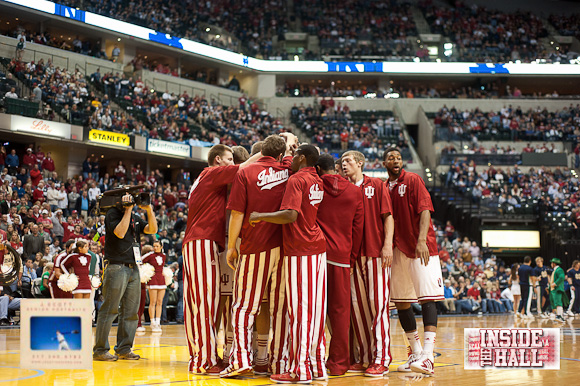 The Big Ten Tournament tips-off tomorrow at Bankers Life Fieldhouse in Indianapolis and given the strength of the conference, this year’s event is shaping up to be one of the best in recent memory. Five teams enter the weekend ranked in the top 15 nationally and many eyes will also be on Northwestern, a team seeking a first-ever bid to the NCAA Tournament.

Here’s our tournament primer to prepare you for what lies ahead:

The Favorite: Ohio State. After outlasting Michigan State to claim a share of the regular season conference title on Sunday in East Lansing, the Buckeyes won’t be lacking confidence in their ability to win three games in three days. And they shouldn’t be. They’ve got the league’s most dominant post player in Jared Sullinger and a senior in William Buford who is capable of taking over games with his outside shooting.

Next in line: Michigan State. It’d be no surprise if the Spartans claimed the crown, but without Branden Dawson (torn ACL) the task becomes much tougher. After dropping two straight games to Indiana and Ohio State, Michigan State settled for a three-way tie for the conference title and will be looking to make a statement. They’ll need a big weekend from Draymond Green and better guard play from Keith Appling, Brandon Wood and Travis Trice to emerge victorious.

Don’t forget about us: Michigan and Indiana. The Wolverines are actually the No. 2 seed in the bracket, but their reliance on the perimeter play could make them ripe for an upset. They’re also capable of beating the league’s best teams if Trey Burke and Tim Hardaway Jr. play well as a tandem. The Hoosiers enter as the hottest team having won seven of their last eight games. But they have no player on the roster with a conference tournament win.

Darkhorse: Northwestern. The Wildcats arrive in Indianapolis with more to play for than any other team. A Thursday loss to Minnesota will likely send them to N.I.T. But get past that game and they’ll get a third shot at Michigan with a NCAA Tournament bid on the line. The Wildcats have already taken the Wolverines to overtime twice.

Top four seed with easiest path to Sunday: Ohio State. The Buckeyes will face the winner of Nebraska/Purdue on Friday night and would then get the winner of Michigan/Northwestern (assuming the Wildcats beat Minnesota). None of those four can match the talent of the Buckeyes or coaching success of Thad Matta, who is 14-4 in the Big Ten Tournament.

Top four seed with toughest path to Sunday: Michigan. The Wolverines will likely get a Northwestern team hungry to avenge a pair of regular season losses and punch their NCAA Tournament ticket in a Friday quarterfinal. If they survive, a rematch with the Buckeyes awaits.

Most dangerous player: Jared Sullinger, Ohio State. The sophomore forward came back to Columbus to win the Big Ten, the Big Ten Player of the Year and a national championship. After splitting the league title and falling to Green in the race for the league’s top player, Sullinger will be motivated to have a big weekend. Without a big man capable of defending him until Sunday, things are shaping up favorably for him.

Team with the most to play for: Northwestern. And it’s not close. The league’s top six teams are locks to dance. The bottom five teams won’t dance unless they can win four games in four days. The Wildcats, meanwhile, sit firmly on the bubble with work left to do to solidify their bid. Factor in the storyline of chasing their first tournament appearance in school history and the national storyline coming out of the weekend will be how Northwestern fares.

· Tickets: All-session tickets for the 2012 Big Ten Men’s Basketball Tournament are on sale now, and single-session tickets will be available on Monday, Feb. 27, at 10 a.m. ET. Tickets can be purchased at Big Ten university ticket offices, the Bankers Life Fieldhouse box office, Ticketmaster outlets, www.ticketmaster.com or by calling Ticketmaster at (800) 745-3000.

· IU Alumni Event: The IU Alumni Association will hold a pre-game rally for alumni and fans at 11 a.m. Thursday at Kilroy’s at 201 S. Meridian St. If IU wins, another event will be held Friday three hours prior to tip-off.