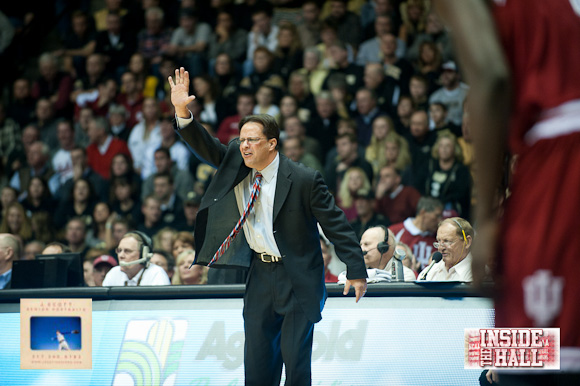 Around the Hall is recommended reading from the Inside the Hall. So go ahead, get your read on.

+ Dustin Dopirak of The Herald-Times recaps Tom Crean’s comments on his weekly radio show which included discussion of Indiana’s philosophy on defending ball-screens.

+ Sean Morrison of Inside Indiana profiles Ron Patterson and his growth into one of the toughest players in the class of 2012.

+ The Hoosiers moved up five spots to No. 18 in the Associated Press poll and moved up three spots to No. 20 in the USA Today/ESPN Top 25 released on Monday.

+ Indiana continues to improve from an efficiency margin standpoint and the Hoosiers are No. 5 in ESPN.com’s latest Big Ten power rankings.

+ Cody Zeller picked up his sixth freshman of the week award from the Big Ten.

+ Indiana checks-in at No. 6 in the first class of 2013 team rankings on Rivals.com.

+ A few days old, but Kyle Neddenriep of The Indianapolis Star breaks down the race for Mr. Basketball.

+ Former Illinois star and ESPN analyst Stephen Bardo says Bruce Weber is on the hot seat and is being evaluated with a fine-tooth comb.