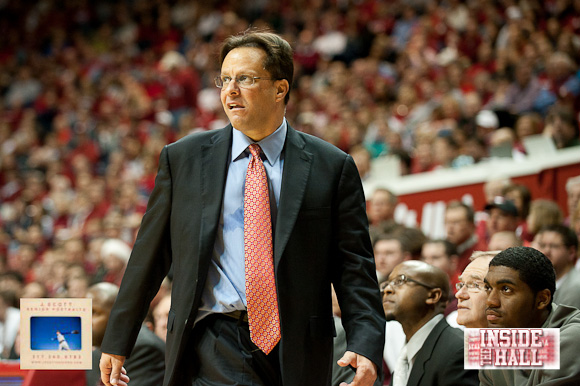 “I think anytime you’re in a season, especially in conference play, and you can feel like you’re getting better and improving, then things are moving forward. I felt like this week we did. We definitely got better from our game at Nebraska Wednesday night to playing Penn State yesterday. I think it showed in the way that we played and getting better is physical, it’s mental, it’s every aspect of it. I think that’s what we’re focused on and our team did a nice job yesterday.”

On the overall strength of the Big Ten this season:

“Even the guys that are new to the league like Doc Sadler and Pat Chambers know exactly what they want to do and they’ve got very strong programs.”

“It’s an extremely well coached league. It’s got excellent continuity in it.”

“It’s not a league that has a lot of players jumping out early. There’s very good young players, certainly in the league, but there’s also an excellent amount of juniors and seniors on a lot of the teams that have been through so many different things and they understand the value of possession by possession.”

On whether the season to-date has surpassed his expectations:

“I don’t spend much time on expecations in the sense of where a program is at or where our program would be at.”

“If you feel like you’re getting better day-to-day, then the process is going to work itself out.”

“Certainly Cody [Zeller] has brought a ton to the program and we anticipated that, but there’s no way to quantify or predict what a freshman is going to do in a program. You can be hopeful, but certainly Cody has done a lot of things with a lot of room to get better and a lot of room to make this team even better.”

On what stands out about Wisconsin:

“Their experience, they know how to play.”

“They have numerous guys that can play at a really high level.”

“I think when they’ve been at their best they’ve had really good balance.”

“Their system is very strong and solid. They’re hard to score against. They pack the lane. But at the same time, they’ve got a lot of balance in their scoring and people that really space the court which puts a lot of pressure on not only your on the ball defense, but your help defense.”

On the importance of getting a win on Sunday:

“I think it validates the work. They put so much time into it and we certainly didn’t want this team to have the past, especially for the older guys, play into their minds because that’s somewhere you don’t want to go. We don’t spend a lot of time on the past but we also know it’s in the back of their minds.”