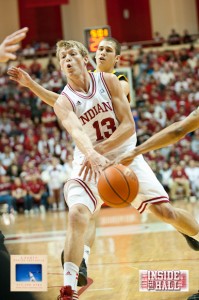 “They have three guys in the top 15 in offensive rebounds in the Big Ten. You have to be fast, quick, and hold your position. They move the ball through Draymond Green, but he also leads the team in assists.”

“The ball moves at a pretty high rate. When you watch them and where they are now as opposed to where they were the first two games of the season it is easy to see they are getting deeper and better.”

“We have to have a strong mindset which begins in practice. We have to block out and we have to be relentless in pursuing the basketball and knowing where our man is at all times. Our transition defense will have to be at its best.”

On starting the Big Ten:

“Our guys understand how challenging it is in the Big Ten and at Michigan State. We have to maintain the attention to detail that we have displayed all year in getting ready for opponents. We have played 12 games and found 12 different ways to win.”

On going to East Lansing:

“Every year is different and every team is different. I think our team knows that to win on the road in a hostile environment it has to execute and eliminate mistakes that leads to easy baskets which get the crowd into the game.”

“It will be nice to see some family and friends but our approach in this is more business than anything else.”

On the team’s health:

“There is really nothing new to report. Will and Verdell stayed back and got some extra treatment before heading out for Christmas and they continue to get better.”

On what the Hoosiers can improve on:

On what the team will take from the non-conference portion of the schedule into the Big Ten slate:

“Each game was different and we had different gameplans but we attacked it the same way, whether it was in practice or in film. So we just got on one-game win streaks and that’s what we have to do in the Big Ten as well.”

On starting the year at Michigan State:

“It is a tough road game and they are a good team so we know that we have to do a lot of things right. As long as we do what we can do, we just have to have a great energy and mindset.”

On what the team will take from the non-conference portion of the schedule into the Big Ten slate:

“The defensive intensity, that has been the main thing for us so far. We have to play with all five guys on the court playing together on defense.”

“First, we want to take it one step at a time. We have done a great job of finding each other on the court and that has led to our success so far this year.”

On playing in his first Big Ten Conference game as a freshmen:

“It means a lot because this is where all of the hard work that we have put in can pay off. The Big Ten is a really good conference and we just want to get out there and get another team win.”

On playing in his first Big Ten Conference game as a freshmen:

“We know we have to go out and keep doing the things that we have been doing. For me, I just have to enjoy every minute of it and do whatever it takes to get a win.”