What to Expect: North Carolina State 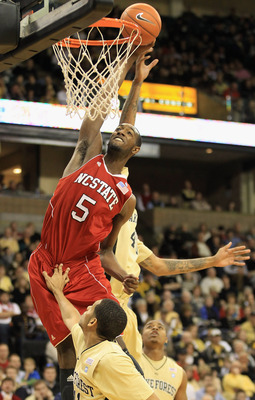 Indiana looks for its first 7-0 start since the 2002-2003 season on Wednesday night when the Hoosiers visit Raleigh for a meeting with North Carolina State in the ACC-Big Ten Challenge.

Here’s a look at what to expect from the Wolfpack, who are 5-1 including a neutral court win over Texas:

Winning away from Assembly Hall has been a tall task in the Tom Crean era, but Indiana easily answered the call 13 days ago in Evansville at the Ford Center with a 94-73 rout of the Purple Aces.

Life on the road becomes significantly tougher tomorrow night as first-year head coach Mark Gottfriend leads a talented group inherited from Sidney Lowe in Raleigh. Lowe’s failure to take N.C. State to the NCAA Tournament in five seasons resulted in his dismissal and after a lengthy coaching search, the Wolfpack settled on Gottfried.

A QUICK LOOK AT THE ROSTER

Sophomore C.J. Leslie (pictured), a McDonald’s All-American who considered leaving for last summer’s NBA Draft, is the headliner on a talented roster. The 6-foot-8 forward, who missed the first three games after a family member received $410 in impermissible benefits, is averaging 16.7 points off the bench since his return.

Joining Leslie in the front court rotation are 6-foot-8 junior Richard Howell and 6-foot-9 junior DeShawn Painter. Howell, who Basketball Prospectus calls “one of the more intriguing breakout candidates in the whole country,” has 19 offensive rebounds in six games. Painter is shooting close to 55 percent and is averaging 6.2 rebounds. Both players are scoring in double figures.

Back court depth is more of a question mark, but a pair of starters, 6-foot-5 sophomore Lorenzo Brown and 6-foot-6 junior Scott Wood, return. The Pack believed they had their point guard of the future in Ryan Harrow, but he opted to transfer to Kentucky after Lowe’s dismissal. Brown, who started 26 games as a freshman, is the point guard and through six games, he’s dished out 39 assists to just 18 turnovers. Wood, a Marion native, is one of the better 3-point shooters in the ACC.

The KenPom.com numbers show one glaring area of concern for Indiana — rebounding. The Hoosiers should be able to score the ball (three N.C. State opponents have already broken 70), but can they keep Leslie, Howell and Painter off the offensive glass? It bears watching and is likely a concern as the IU staff prepares for this game.