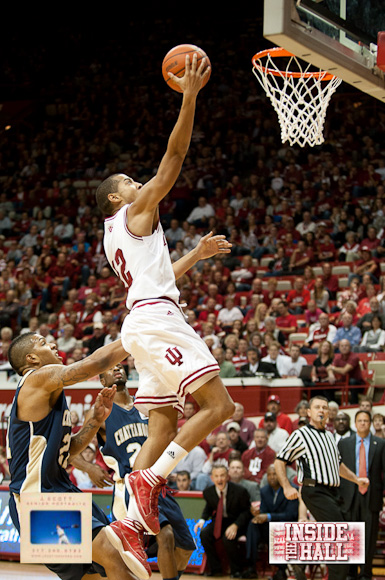 Indiana media relations just issued the following quotes from Tom Crean, Jordan Hulls and Verdell Jones as the Hoosiers prepare for a Wednesday night game at the Ford Center in Evansville:

“Evansville is a very good team and I have a great deal of respect for Marty Simmons and his staff.. They run motion, but with a lot more patterns and they really get after you on the defensive end.”

“We are going to have to be at our best defensively and force them to take tough shots. We have to have good movement and spacing on offense and attack the glass at both ends.”

“We are really looking forward to get a chance to play in the new Ford Center. It’s going to be a great environment for us to play in. We will face a sellout crowd and they are coming off a big win. The IU fans in that area have always been very supportive and it would not surprise me to see a lot of fans from Washington there either.”

“Winning on the road certainly is a step that this group of guys knows it needs if it hopes to reach our goals.”

“A lot of the players on both teams are very familiar with one another. Colt Ryan really stepped up his game last year, but they have a number of guys who can hurt you. They are an experienced and veteran team that will take advantage of any opportunity you give them.”

“By coming back from a double-digit lead on Saturday, they showed that they are a resilient group.”

“We are very excited to have the opportunity to play in a new facility. For us, it will be a great challenge. We have done a good job thus far of making it about the task at hand and nothing more. Every year is a new year and if we play with the mindset we have thus far, we can be successful.”

“It was a very good game last year against Evansville, and we do have some familiarity with many of their players. Our defense really was timely and we will need to be at the top of our game for 40 minutes.”

“As a group, I think our team is ready to go on the road and do what you need to do to be successful. Watching film, we were very impressed by Evansville and we have to do a great job of stopping them on defense and making open shots on offense.”

“Our mindset is only on the present. We aren’t looking at the past and we can’t worry about the future. Every game, home or away, we believe we can go 1-0.”