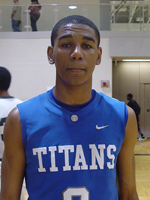 Even with nine verbal commitments secured for the next three recruiting classes, the Indiana coaching staff continues to relentlessly pursue top prospects from around the country.

One of the latest players to garner interest from the Hoosiers is Matt Jones, a guard from DeSoto, Texas.

The 6-foot-5, 180-pound sharpshooter is the No. 21 player nationally in the 2013 class according to ESPN.com and a consensus top 30 prospect.

After watching him play with the Texas Titans at the Super Showcase in Orlando, the Indiana coaching staff quickly reached out to express their interest and offer a scholarship.

“The message was really just telling me stuff about IU,” Jones told Inside the Hall of a conversation he had with Indiana coach Tom Crean. “Just telling me about the program and how great it is academic wise and trying to get me down for an unofficial.”

Jones, who described his recruitment as wide-open, also holds offers from Baylor, Duke, Houston, TCU, Texas A & M and Texas and interest from numerous high-major schools including Florida, Kansas and Memphis.

The Texas native has garnered accolades from national scouts for his ability to shoot from the perimeter, but he has a well-rounded game.

“I can play defense, shoot the ball, go to the hole,” he said. “I can basically just do whatever the coach needs me to do.”

The next step in the process for Jones will be unofficial visits this fall. He’s already planning trips to Duke, Florida and Kansas and didn’t rule out the possibility of making a trip to Bloomington.

Here’s a look at Jones from the Spiece Run ‘N Slam Classic last May from CityLeagueHoopsTV: