Delaney impressed with play of Ferrell, Lyles at Nations 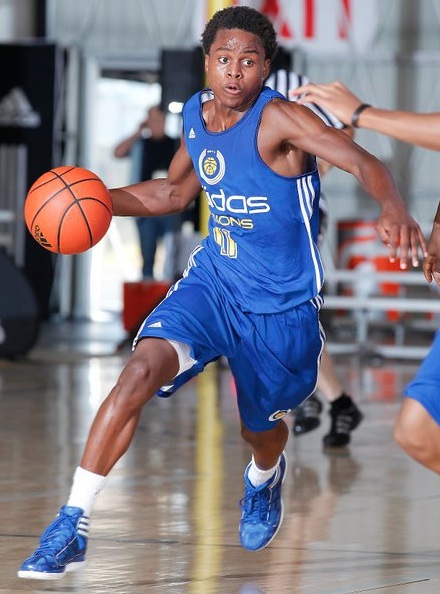 Jason Delaney is entering his first season as head coach at Indianapolis Arensal Tech where he’ll lead a talented group of returning players led by Trey Lyles. Delaney coached last season at Indianapolis Washington, which opened and closed its season with losses to Kevin “Yogi” Ferrell and Park Tudor.

With that unique perspective, Delaney is well-versed in the development and progress of both Indiana commitments and he spoke to Inside the Hall on Tuesday morning about the play of each at adidas Nations:

On Yogi Ferrell at adidas Nations:

“Yogi is a fantastic point guard. You see the improvement over the last couple of years. I coached against him twice last year and just from the sectional championship game, he’s improved even more with his ability to score, especially the pull-up jumper. But he makes the guys around him so much better and that’s what you need from your point guard. You need a leader and you need someone who makes the other players on the floor better. And I think Yogi’s definitely doing that. He’s such a strong guard, too. That makes him tough to guard because he can take contact when he gets into the lane.”

On Trey Lyles at adidas Nations:

“As a fan and his coach, it’s like being his big brother. I’m not going to say father because I’m not that old. I’m so proud of him for playing on that stage. When he got in (last night), I thought he did a great job. 12 points and six rebounds. He’s playing up against older kids and he showed that he belonged. I just hope that all transforms back at the high school level where he can make his teammates around him better like Yogi and use the experiences that he’s been blessed to do and really utilize those on the high school level.”

On how Lyles will be used next season at Tech:

“He’ll be inside-outside depending on matchups. Right now, as they commented last night (on the broadcast), for his age, he has a great touch on the perimeter. He was knocking down jump shots last night and that’s something he’s done this whole year, his freshman year. We want to utilize him a little more in the post as well. That way he’s a strong all-around player. But he’s pretty polished for his age and I know with him, he’ll continue to work hard in the gym. He’s never satisfied. It was kind of a measuring stick (at adidas Nations). He got to go out there and see how he stood against some of the nation’s and world’s top talent and reassess it and come back and work on the little parts of the game that he feels like and we feel like that he needs to strengthen.”