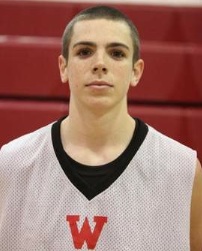 After a freshman campaign at Class 2A Wapahani where he averaged 20.7 points and 5.2 rebounds, 2014 guard Grant Evans is beginning to see his recruitment pick up traction this summer.

The 6-foot-2 Evans was the key to Wapahani’s run in the Lapel sectional as the Raiders won two games before falling 35-34 to Winchester in the championship game.

He averaged 29.3 points over three sectional contests and said he’s trying to prove he’s more than just a scorer.

“I’m just trying to improve on my defense,” Evans said. “Just being more of a leader on the court, my ball handling and my explosiveness.”

His recruiting picture, which is still coming into focus, already includes a scholarship offer from a Horizon League school.

“Wright State’s been in contact, they’re my only offer,” he said. “Butler, Indiana, Purdue, Ball State, Cincinnati and Belmont are the other ones. I’ve visited Wright State, Butler and Purdue and I plan on visiting Cincinnati in the fall.”

While he hasn’t taken an unofficial visit to Bloomington, Evans has been scouted at his high school by Buckley and admitted that he grew up cheering for the Indiana program.

“Last fall they came to my school and watched me work out,” Evans said. “I’ve been down to their Elite Camp and they’ve been in contact with my coaches quite a few times. It (the Elite Camp) was a real good experience just being around the players and the coaching staff and Cook Hall, that’s just an amazing place.”