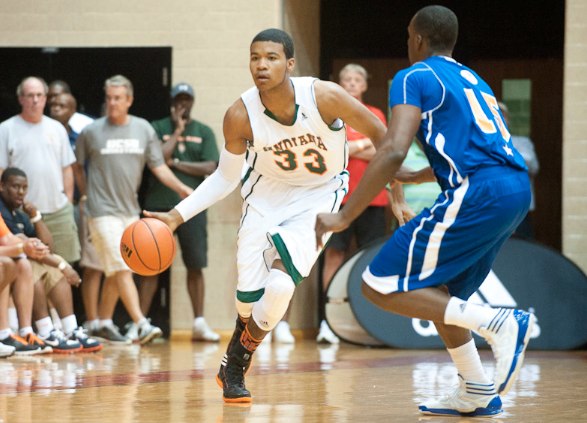 With the first of two live evaluation periods in the books, Inside the Hall takes a look at five Indiana basketball recruiting story lines from the opening ten days of July recruiting:

— Tom Crean earns frequent flier miles: Even with nine verbal commitments lined up for the Hoosiers’ next three recruiting classes and the current No. 1 class nationally in 2012, Crean blazed a trail across the country in the first ten-day period. Confirmed stops included the adidas Invitational in Indianapolis, the NY2LA Sports Next Level Invitational in Mequon (WI), the LeBron James Skills Academy in Akron, the Kentucky Hoopfest in Louisville, the Nike Peach Jam in North Augusta (SC), the adidas College Coaches Classic in Indianapolis, the NY2LA Sports Summer Jam in Mequon (WI), the Best Buy Summer Classic in Minneapolis and the Best of the Midwest in Indianapolis. Crean is often described as relentless on the recruiting trail and that was certainly the case as Indiana’s head coach worked from sun up until sun down scouting IU’s current commitments and top targets.

— Elite goes deep at adidas Invitational, Best Buy Classic: The Indiana Elite team that features Hanner Perea, Jeremy Hollowell and Yogi Ferrell was questioned by some for failing to win a tournament in the spring, but the trio of Indiana commits led Team Indiana into the semifinals of the loaded adidas event at North Central. After dropping their opening super pool contest to Shabazz Muhammad and Dream Vision, Elite bounced back to knock off the Andre Drummond-led Connecticut Basketball Club and the Atlanta Celtics. In tournament play, the hot hand of Hollowell (more on him in a bit) led Elite to three straight wins before falling 60-58 in the event’s semifinals on Saturday to New Heights. In Minneapolis at the Best Buy Classic, Elite advanced to the championship game and finished 5-1. For a group that’s playing together for the first time and possesses limited depth, Team Indiana’s play in the first evaluation period was impressive.

— Hollowell catches fire in Indianapolis: If there was any doubt that the Lawrence Central senior deserves to mentioned among the nation’s elite high school players, it was erased during the four-day period in Indianapolis. The 6-foot-7 Indiana-bound wing averaged over 22 points in the adidas Invitational and he did so in a variety of ways. Hollowell knocked down contested shots from beyond the 3-point line. He connected on pull-up mid-range jump shots. He backed down defenders and either finished or made his way to the foul line. And he did it against elite competition. Hollowell’s laid back personality has been viewed by some as a negative, but it’s time to start recognizing him for what he is: a competitive player that wants to win.

— Wisconsin big man emerges as big priority in 2013: Our first mention of Luke Fischer was on June 15, the first day college coaches could call prospects in the class of 2013. Indiana’s pursuit of the 6-foot-9, 210-pound junior from Germantown has accelerated quickly in the past month. Crean made a trip to the NY2LA Next Level Invitational in Wisconsin on the second day of the evaluation period to see Fischer, a trip to Louisville to watch him in the Kentucky Hoopfest and another trip to Wisconsin just days later to see him again. Fischer isn’t highly regarded by national scouts, but he’s a rapidly improving prospect with a knack for being in position to make a play. Indiana offered Fischer right before the evaluation period and while Wisconsin also tracked him closely, this appears to be a recruiting battle in which the Hoosiers currently have the upper hand.

— The first 2015 scholarship offer is extended: Jalen Coleman has yet to play in a high school game. But the Indiana staff already thinks highly enough of the 2015 Indianapolis Cathedral prospect to offer him a spot in Bloomington. Indiana’s early attention to Trey Lyles and James Blackmon Jr. last July paid dividends when the duo both gave verbal pledges last September. Coleman played up one year with the Eric Gordon 15-and-under team at the adidas Invitational and Best of the Midwest. In both events, the 6-foot-2, 155-pound guard excelled as a facilitator and a scorer off the dribble. While there’s a risk in offering a kid that’s yet to log a minute of high school basketball, there’s also a risk in letting another school like Michigan State or Purdue get a leg up on one of the state’s premier talents.