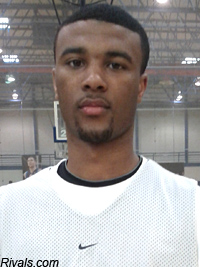 2013 Louisville Trinity guard Darryl Hicks was forced to sit out his sophomore season due to Kentucky High School Athletic Association transfer rules, but is back on the scene this summer splitting time between the Tennessee Travelers and The Ville.

As a freshman at Shelby County, Hicks averaged 13.5 points and helped lead his team to the Sweet 16 of the Kentucky State Tournament, where he scored 30 points in a loss to Ballard at Rupp Arena.

The 6-foot-4, 180-pound Hicks picked up his first scholarship offer from Indiana more than a year ago and talked about his interest in the Hoosiers, his recruiting picture and his relationship with Tom Crean in a Q & A with Inside the Hall on Sunday at the Kentucky Hoopfest:

On what he worked on during his transfer season:

“When I was sitting out I just worked on my ball handling and I still got up shots and everything. I still conditioned and everything so I could come out on the AAU circuit and be in good shape. Sitting out it was very frustrating because I’m used to playing every day and it was boring sitting down all of the time.”

On the schools recruiting him the hardest and who he’s noticed watching him so far:

“The schools that are recruiting me the hardest would probably be Indiana and Georgia Tech. There’s a lot of other schools that I’m not as familiar with that were at the Hoosier Shootout.”

On his interest in Indiana:

“Indiana is the school that’s the most in contact with me right now. I think I really like Indiana a lot and that’s probably going to be one of my top schools that I will choose from.”

On the schools he heard from on June 15 besides IU and Georgia Tech:

On what he likes about Indiana and his relationship with Coach Crean:

“Coach Crean would probably be the reason I would go to Indiana. He and I have a good relationship and he talks to me all of the time. He tells me what I could do better and how I would fit into the program and everything.”