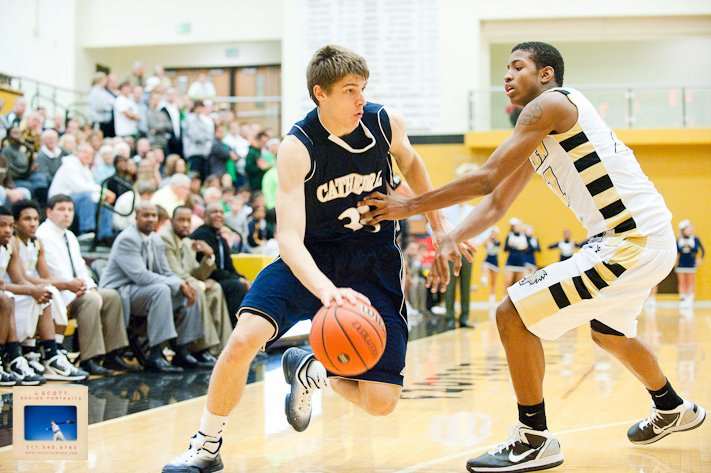 Matt Green serves as an assistant coach at Cathedral during the high school season and coaches the Eric Gordon 16-and-under team that features Collin Hartman, Devin Davis Jr., V.J. Beachem and Zak Irvin in the summer.

Inside the Hall caught up with Green after a pool play game at the adidas Invitational on Wednesday to get his thoughts on the spring and summer to-date for Indiana’s two class of 2013 commitments:

On the recent play of Collin Hartman:

“The month of June was big for Collin. He got way more aggressive offensively. We saw him taking the ball to the basket using either hand, going to the basket finishing at the rim. He’s gotten hot in a few games during school ball in June where he really shot it well. I think up at Purdue hit seven 3’s in a game. He’s just made the transition from being kind of the role guy in high school to taking more of a lead role offensively. He’s improved defensively, but rebounding he’s doing a lot better job.”

On the recent play of Devin Davis Jr.:

“Devin Davis was the opposite in the month of June. Got a sprained ankle early in the month of June, but where he made his biggest steps was in spring high school season, he had that hurt back and didn’t play a lot. But in the spring period for us, Devin Davis was a monster on the glass. Double figure rebounds every game we went out and played. He’s not afraid to do all of the dirty work. Where he’s improving a lot is his jump shot. That 15-foot to even some 3’s every now and then. He’s really doing a great job of doing that. And he doesn’t mind playing a role. And that’s the biggest thing. Whatever it takes to win that’s what he’s about right now.”

On where Davis Jr. fits at the next level:

“In college, they’ll pigeon hole him somewhere. I see him more probably playing a little more of the four where you know in college they’re kind of going to more of a four out, one in where he’s kind of like the four that can handle it a little bit. He doesn’t shoot it that well, but he rebounds better than a lot of people at his size. So I think he’ll probably play the four unless he improves his ball handling to the point where he can just go by people and his jump shot is respectable enough. He can play the three then, but I think more of a four role when he gets to school.”