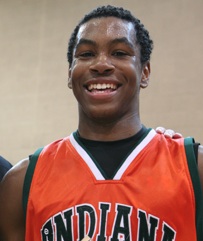 2014 Speedway guard Justin Brent put together a stellar freshman campaign that included several 20-point games and as a result, high-major schools have started to take notice in the 6-foot-4 prospect.

Inside the Hall caught up with Brent, who recently took an unofficial visit to Bloomington, earlier this week for a Q & A:

On his recent unofficial visit to Bloomington:

“When I was there, it was great. They showed me around, took me on a little golf cart type thing and we went around the whole campus. And then I played open gym with the players. That was the thing that excited me because I was so nervous, my first shot was an air ball. But then after that, I did really well. It was real cool.”

On the feedback he’s received from the Indiana coaching staff:

“When I was there, they said the main things that caught their attention was my character, that I was smart and my athletic upside. They said they noticed that from when they came to watch me play football at Lucas Oil. They couldn’t tell I was a freshman because even if the ball wasn’t coming to me, I was still running my routes perfectly fine.”

On the schools that have expressed interest:

“Indiana, Purdue, Georgetown, Xavier, Virginia Tech, Notre Dame, Marquette, Dayton, Detroit and Wright State. Those are the only ones so far.”

On his style of play, strengths and weaknesses:

“I play point guard for my high school team and I’m pretty big for my age so I really don’t have a problem driving to the bucket. I worked on my jump shot a whole bunch going into my freshman year so now if they’re backing a way, I can hit the jumper, I can hit the mid range jump shot. My left hand can always get stronger so I’m improving that a lot. Jump stopping is one thing my coach stresses a lot. I try to use that a lot.”

On if he believes he’ll play basketball or football in college:

“I’ve been playing basketball my whole life and I’ve also played football my whole life, but I think basketball is where it’s at. With football, I was contemplating not even playing this year, but I guess a lot of coaches like an athlete that play two sports and plus I just like it a lot to play. But I was always nervous about the fact that I could receive an injury. But I’m going to stay with it. College wise, I’ve gotten one letter from Texas A & M and it was just a questionnaire, but that’s the only thing I’ve gotten for football. I don’t think I see myself playing football in college, I think it’s basketball.”