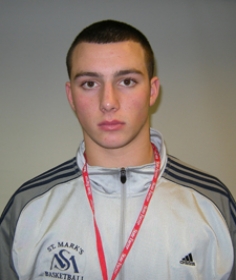 A new name to surface on the Indiana radar for the class of 2014 is St. Mark’s (MA) forward Jarred Reuter. The 6-foot-8, 250-pound Reuter is described on his ESPN.com scouting report as a “power player with a terrific motor.”

Inside the Hall caught up with Reuter, who missed his freshman season due to a foot injury sustained playing football, for a Q & A:

On the interest from Indiana:

“Two weeks ago at Elite Camp they offered me. I got down there and met with Coach Crean on Saturday before Elite Camp and just looked around the campus a little bit and went and played throughout the day on Sunday. After Elite Camp is when he (Coach Crean) offered me.”

On his game and where he is as a player:

“Right now I’m like 6-foot-8, 250. So I think a big part of my game that stands out is that a lot of kids don’t have is just strength. I’m just ahead of my age for physical strength and size right now, but because of that I rebound really well and I play well in the paint against big bodies. My shot’s pretty good all the way out to 3, but mid-range to 3 I can knock it down. I can pass as well.”

On the campus, Elite Camp and the IU coaches:

“The first day I was, I don’t even know how to explain it, more than impressed with the campus when I saw everything. It was amazing. It was beautiful, the size of it and all of the people. That got me liking it right away, before even playing or meeting all of the coaches at once, was just going on campus for the first ten to fifteen minutes. I could already see that it was somewhere I might want to be because I liked it a lot. Going through camp, hearing all four coaches talk and do drills and some of the players talk, I liked the way they were.”

On where he’ll be playing in July: