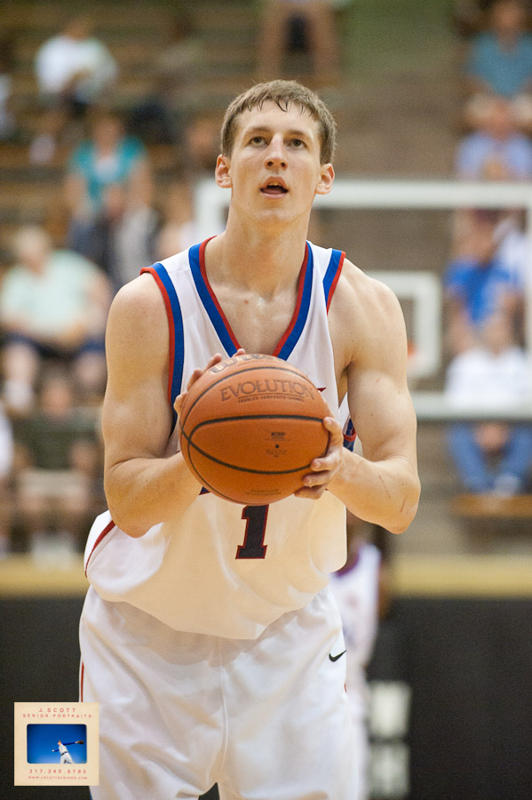 — Scouting: Zeller had an outstanding week. He put up ridiculous numbers in the two exhibition wins over the juniors and while he was limited in Friday’s game with foul trouble, he nearly managed a double-double in just 20 minutes. Zeller has a complete skill set: He can step out and shoot from the perimeter, handle the ball with fluidity and score with his back to the basket. He was fantastic rebounding the ball, showing off strong hands, good timing and above average athleticism as a leaper. Zeller did just about everything a big man should do last week, impressing onlookers, coaches, teammates and opponents alike. — Joe Eberhardt

— What’s next: Zeller will step into the starting lineup immediately upon his arrival in Bloomington and while expectations might be too high, Zeller’s calm demeanor and quiet confidence should allow him to be mostly unaffected by the pressure. Indiana’s front court will be greatly improved as Zeller’s presence should help free up Tom Pritchard, Derek Elston and Christian Watford for easier scoring opportunities. Don’t be surprised if double-doubles are the norm rather than the exception during his freshman campaign. — Alex Bozich

— Scouting: Etherington struggled to score the ball or get into the flow offensively for much of the week. The 6-foot-6 wing is typically a reliable shooter, but just couldn’t get looks to fall when he found an opening. Etherington did play pretty well defensively by using good instincts and strength to keep his opponents in check. The highlight of his weekend was a crowd-pleasing block against Western Kentucky signee George Fant at Conseco. — Joe Eberhardt

— What’s next: The Indiana roster is heavy on wings and guards and if Etherington is to command minutes as a freshman, he’ll likely be competing with Will Sheehey, Victor Oladipo and perhaps Maurice Creek in order to do so. Etherington was recruited as a high-level shooter and scorer and when those aspects of his game are clicking, he can be a tough matchup.  — Alex Bozich

— Scouting: Indiana’s most recent addition to the 2011 recruiting class gives the Hoosiers a 6-foot-4 guard who can contribute in many ways. Abell is a reliable ball handler with a dose of strength that allows him to attack defenses off the dribble and get to the rim. His strength and ball control allow him to finish at the rim against contact and get to the foul line. Abell is also a good perimeter defender that played effectively on Kentucky signee Marquis Teague in Saturday night’s loss at Conseco Fieldhouse.  Though he has room to improve his consistency, Abell has the ability to knock down shots from the perimeter (3-of-7 on 3-pointers in Saturday’s game). He could improve his decision making as a passer, but has the ability to break down defenses and find teammates open for jump shots. — Joe Eberhardt

— What’s next: Abell said last week that he hopes to get a shot at playing point guard as a freshman and his play over the weekend suggests he could get that opportunity. Abell is college ready from a physical standpoint and if his ball handling and decision making continue to improve, he’ll make an instant impact in the dribble drive offense that Tom Crean is trying to implement. His impact should also be felt defensively as Indiana looks to improve upon a perimeter defense that had difficulty guarding the 3-pointer. — Alex Bozich