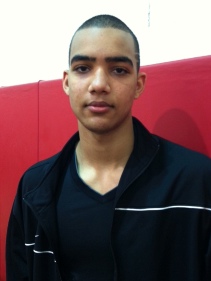 Inside the Hall got its first look at 2014 Arsenal Tech forward and IU commit Trey Lyles on Friday at the Bill Hensley Memorial Spiece Run ‘N Slam All-Star Classic in Ft. Wayne. We caught up with the 6-9 freshman after a pool play win at Northrop High School for a Q & A:

On his mindset entering the Run ‘N Slam:

“Just to play hard every play. Every game, play hard. Just try to do within my capability for us to win as a team. Not try to go out there and show out as an individual, but score as much as I can, do whatever I can, but help the team win as a group leader.”

On what he’s trying to improve the most about his game:

“Probably just getting the mentality that I can score whenever I want, be more selfish, but I’m very much a team player. But sometimes I’m too much of a team player when it gets down to games where they really need me to score. I might be very passive at the beginning, but I need to work on being more selfish. Just playing against better competition and better guys will help me out a lot.”

On being able to focus on getting better rather than his recruitment:

“It helped me to commit early so I could get a lot of the pressure off me. I still got to go out there and play hard and perform as well as I can, but committing early kind of helped out in the long run.”

On why he decided to commit early to Indiana:

“Just the coaching. They’ve got a great coach and the recruits are great. We’ve got a lot good guys coming into play with us. I just thought that would be the best situation for me in the future.”

On the competitiveness between the 2012 recruits and 2014 recruits:

“It’s just a competitive spirit that we have as individuals. We’re all going to the same school. Hopefully we can get the 2012 guys playing against the 2014 guys in a game.”