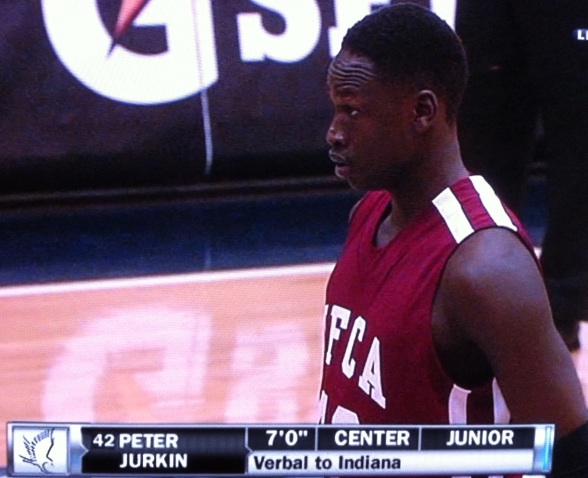 Here are a few observations from the game, which was broadcast on ESPNU:

— Jurkin, who finished with seven points and two rebounds, appears to have added some weight to his frame. Continuing to improve upon his upper body strength will be a key in determining how soon the 7-0 junior will be able to contribute upon his arrival in Bloomington. His ability to affect and block shots makes him an intriguing prospect, but the added bulk will be pivotal in a physical Big Ten.

— The IU commit still looked to be favoring his leg, which caused him to miss nearly two months of the season due to a stress fracture. It certainly wasn’t a good representation of just how well Jurkin can run the floor when he’s 100 percent. He split time with Henry Uwadiae, who got the start at the five.

— Jurkin made the most of his limited touches in the post. United Faith Christian Academy’s Braxton Ogbueze (Florida commit) dominated the ball and there wasn’t much focus on getting the ball inside. That said, Jurkin quickly established himself with a one-handed dunk on the first possession after entering the game with just under five minutes to go in the opening quarter. He also showed nice touch in knocking down a bank shot over Oak Hill’s A.J. Hammons on the right block and got to the foul line and hit 1-of-2 free throws.

— The Sudan native did a nice job of holding his position and staying on his feet rather than trying to block every shot attempt. But when he did go into the air against a driving Quinn Cook (Duke signee and McDonald’s All-American), Jurkin came up with an impressive block.