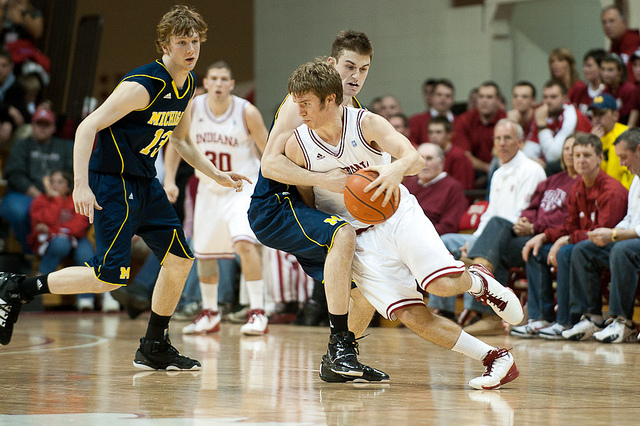 Welcome to “That’s A Wrap,” our attempt to make some sense of the 2010-11 season. Sit back. Relax. Grab some popcorn. Get your read on. Today: Indiana’s Team Offense.

For as much as Indiana’s offense was criticized for a lack of cohesion at times throughout this season, there was movement in a positive direction in three important categories year-over-year in Bloomington.

But with any good news, there’s usually a bit of bad news as well.

While Indiana progressed in two of the four factors to winning (eFG% and turnover percentage), the Hoosiers regressed in both offensive rebounding percentage and free throw rate, which isn’t exactly encouraging for a program looking to remove itself from the conference cellar:

The dive in offensive rebounding percentage is concerning when you consider Indiana was the second best team in this area during Big Ten play a year ago and ended up ninth this season. Tom Crean has stressed the importance of offensive rebounding in his coaching philosophy and this team didn’t perform at a high enough level.

The decrease in free throw rate (from 2nd to 6th in Big Ten play) seems like a result of being too perimeter oriented (IU shot 77 more 3-pointers this season) and failing to attack the basket with enough regularity.

Bottom line: As the current roster continues to mature and the talent improves with the additions of Austin Etherington and Cody Zeller, Indiana’s offense should move into the top half of the Big Ten next season. But just how far the unit progresses could hinge on bounce back seasons on the offensive glass and getting to the foul line at a far higher rate.