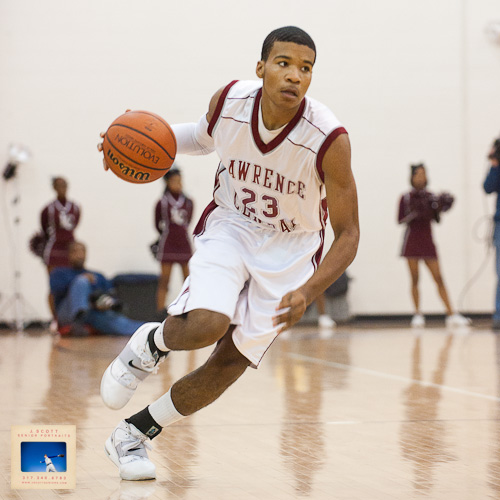 Note: Video of Hollowell’s announcement is available after the jump, courtesy of our friends at the Hoosier Scoop.

Earlier this afternoon, Jeremy Hollowell became the fifth recruit to join Indiana’s 2012 recruiting class and we’ve transcribed the Lawrence Central junior’s comments from his Thursday press conference for your covenience below:

“I just want to start by thanking everybody for coming out. First I want to thank God for putting me in the position I’m in, being blessed to be in the position I’m in. I want to thank my mom for everything she’s done for me. My dad, who drove a long way last night to be here with me today. I want to thank my sister and my older brother for giving me advice. All of my friends, teammates, coaches, my school. But we’re here today to figure out what college I’m going to. It’s been a long recruiting process. It’s been tough. It’s been fun though. A good experience. But I’m ready to decide and I’m pretty excited with my decision. The school I plan on attending for college will be Indiana University.”

On whether he let the coaches know his decision before announcing

“Yeah, he (Tom Crean) was in yesterday to watch me work out. I called him afterwards and I told him.”

“Yeah, it did. At Indiana I see something pretty amazing about to happen. And I wanted to make sure I was a part of that. I didn’t want to regret it down the line. Playing with those guys should be pretty exciting. I was real happy about it. I’ve been knowing Yogi (Ferrell) since the third grade. I played with Ron (Patterson) a couple of summers ago. I think we can do something pretty special.”

“It started out Ohio State, kind of backed off a little bit, rethought it.  I was still kind of young so I didn’t really take it all in. Purdue picked up, talking to Terone (Johnson) a lot, he really wanted me to come there but I had to do what was best for me.”

On why he chose to make his decision before AAU began

“He compared me to Christian Watford. Playing multiple positions, guarding different positions. Being able to fill in any spot that he would need me to. Helping out with all of the little things – rebounding, scoring, a little bit of everything.”

On whether the proximity from Indianapolis to Bloomington was a factor

“Yeah, it was important. I kinda get home sick at AAU tournaments, so just imagining being in college without my mom being there without my family being there. I think I should stay close to home for her to be able to come to the games and my family to be here to support me.”

“I’ve been knowing Yogi for a while. Me and Ron became pretty friends playing AAU together. Hanner (Perea) and Peter (Jurkin) I know through AAU. I think we can do something real special. We’re all don’t really play the same position. I think we can all work together and come together as a team.”

“Yeah, it really helped seeing the guys that were going there, knowing they were pretty good players. They’re all high-major players and it was exciting for me seeing who I’d be able to play with and things we can accomplish.”

On when he knew it was Indiana

“I’ve been kinda knowing for a while. That was just my gut feeling. The school I thought would be best for me. I would look at another school and just always think about IU. I feel like if I went there (another school) I would regret it in the long run. So I went with what I thought was best for me. I’m just leaving it up to me now for me to work hard and do what I have to do.”

On what he needs to improve on before arriving in Bloomington

“I need to get stronger, faster, playing every possession hard. Being more aggressive. My ball handling, my foot work, playing defense. Pretty much to prepare for that next level so I’ll be ready.”

“We all know that I’m going to go after Gary Harris pretty hard. He knows that. We’re good friends. I think if we get him we’ll really be something special. He knows I’m going to come after him hard. We’ve been talking about it but it’s still his decision and I’ll leave it up to him but I want to get my two cents in and hope he makes the best decision.”

On how well all of the recruits can fit together

“I think it’s a good group of guys, unselfish guys who just want to win, play basketball and do some great things.”