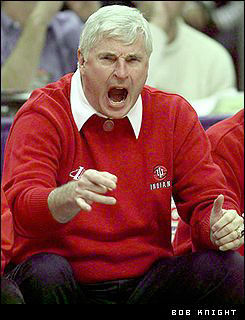 Ohio State football and more specifically Jim Tressel, as you might know, has been in the news the past few days.

And former Indiana coach and ESPN analyst Bob Knight, adamant follower of all NCAA guidelines, took to the airwaves to defend his friend Tressel this morning on Mike & Mike on ESPN Radio.

His comments can be described as nothing less than hypocritical for a man who prided himself for always running a clean program while in Bloomington. Witness:

“There is no coach in college sports that’s a better example, in my mind, of what coaching is all about and what it should be and how things should be done than Jimmy Tressel. He has done a great job at Ohio State, not because he’s won a lot of games, but because he has won a lot of games doing things the absolute right way. And I think that he would be at the top of the heap when it came to picking guys that did things the way they were supposed to be done. There isn’t anybody who is better in that regard than Jim Tressel is.”

Pressed by Mike Golic with the information that Tressel was made aware of potential NCAA violations within his program and failed to report them, Knight offered this response:

“Well then, if that is the case. And that really impresses me that with a Notre Dame degree you are so conversant with all of this. But seriously Mike, if that is the case and then it comes to my attention, then I’ve got to do something about it. And if it did come to Jim’s attention and he failed to do anything about it, then that’s something that he should have taken care of. But that being said, I still say what I’ve said about Jim Tressel and his overall approach to college football.”

Knight was then asked if he agreed with the punishment (a two-game suspension and $250,000 fine) handed down to Tressel on Tuesday evening by Ohio State:

“I think it’s absolutely ridiculous. I think if something like that comes up, it is not the most noticeable of rules. It’s a rather obscure rule. And they’ll say, ‘well, he should know all of the rules.’ Nobody, God himself, could not quote every rule in the NCAA law book. In fact, God would call on the disciples to decipher it for him.”

“I think it’s too harsh. I don’t understand why it isn’t just something like, ‘hey, you know, let’s just get it taken care of, get this resolved and go from there.’ I mean, you played and when you were playing, did your coach know everything that you and your teammates did? No, not even close to it.”

And in one final comment, Golic and Greenburg gave their colleague one final chance to call shenanigans by reiterating that Tressel was made aware of the violations months before they came to life. He had none of it and continued to blindly defend his friend:

“Well, then, that adds some severity to the whole situation. Again, you gotta keep in mind that I’m not conversant with all that took place. But again, I go back to what I said about Jim Tressel. If I was the father of a kid that played football, he’s the kind of coach I’d like for him to play under. And I feel very strongly about that. So if there’s a problem here where he screwed up, he’s not the first coach. Is he the first coach to ever screw something up? No. And I think that taking a coach out of the game is a little bit drastic and something like this, maybe Jim straightened it out at the time. Again, I don’t know all of the details.”