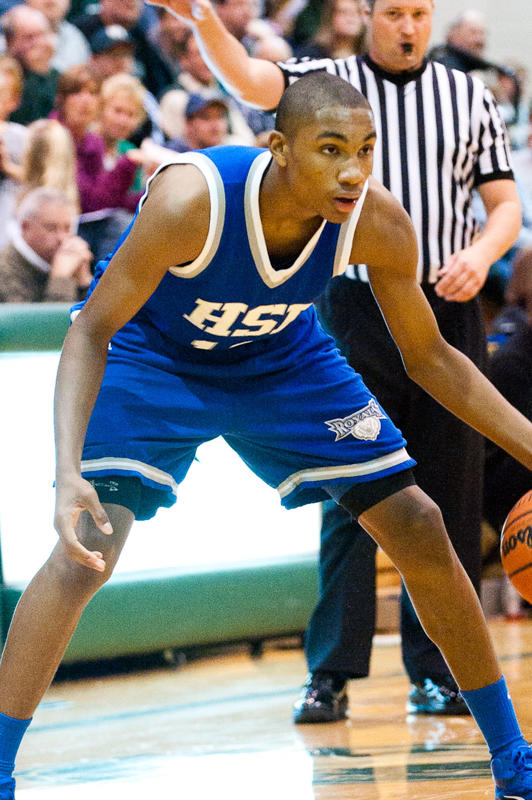 Hamilton Southeastern sophomore guard Zak Irvin was one of the unofficial visitors at Saturday’s Indiana-Northwestern game at Assembly Hall. Inside the Hall caught up with the 6-6, 180-pound guard, ranked No. 42 nationally in the 2013 class by ESPN.com, for a Q & A on Sunday afternoon. (Photo courtesy of Jamie Owens of J. Scott Sports.)

On his season to date at Hamilton Southeastern both as a team and individually: “The season overall is going pretty good. We have a great record. We’ve only lost three games this year. For myself, I had an injury earlier in the year. I sprained my MCL. I had to wear a brace for a couple of games. But I went without it in the Carmel game. So my knee is back to 100 percent and I think that I’ve been playing really well.”

On the knee injury, how it occurred and his return to 100 percent: “I injured my right knee in the North Central game. I came down wrong on it. It’s been pretty easy to come back from.”

On the adjustment from playing junior varsity as a freshman to starting varsity as a sophomore: “I think strength is a big part. Just me getting stronger will help a lot as my high school career goes on.”

On where he’s improved his game the most this season: “I think I’ve probably improved with my off the dribble, shooting off the dribble. That’s probably what I’m best improved at. I think my ball handling and rebounding more.”

On the college games he’s attended this season and an update on his recruitment: “I have six offers from IU, Purdue, Illinois, Xavier, Baylor and Miami (FL). I’ve gone to a couple of Purdue games, a couple of IU games and I’ve been to a Xavier game also. And Michigan games, too.”

On whether his AAU teammates like Devin Davis, Collin Hartman and Basil Smotherman are trying to recruit him: “I’m friends with all of them. I get a text here and there telling to me to commit to Purdue or commit to IU. But most of the time we just have fun with it.”

On friends at school asking him about his recruitment: “All the time I get asked at school where I’m going to go and whether I’ve committed yet. But I just tell them I’m viewing all of my options and I’m not ready to commit anywhere.”

On how Indiana’s current success on the court could factor into his decision: “I mean it does affect my decision a little bit how they’re doing now, but the majority of my decision will be to see how they’re playing before I get there like next year or the year after that.”