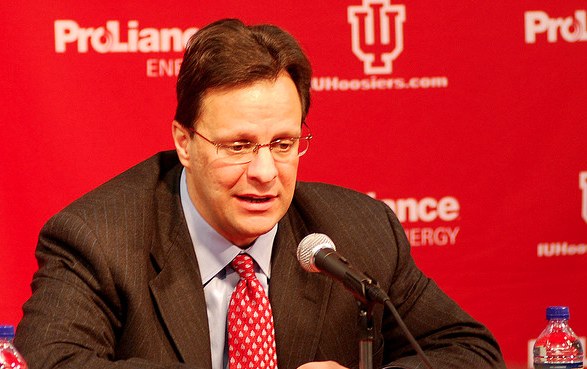 Here’s a transcript of Tom Crean’s comments to Don Fischer following the Hoosiers’ 73-69 loss to Michigan at Crisler Arena on Saturday afternoon:

“No question. First and foremost and like I said to them, aren’t we getting tired of being the team that plays real hard and makes comebacks and gets real close? I mean at some point we’ve got to get tired of that. And it’s never, ever about playing hard. And yesterday’s practice was a great example. And I walked out on this team at the very end of it because I was so disgusted with nobody grasping what I was talking about in this sense. We practice hard and play hard every day. There’s not a doubt about it. This is one of the hardest playing teams I’ve ever coached. But this is not a team that has any opportunity to ever back away from having a combative mindset when they practice. A combative temperament. It’s not just a basketball temperament. That sometimes is overrated. It’s a combative and it’s even more than competitive. When we’ve done that and we’ve built on that and when we’ve taken that to games, we’ve played very well. And what you saw in the comeback was a combative team. Very, very combative. We got calls, we were aggressive and it’s a disappointment because right now, we don’t understand that, we don’t put game plans together in like seven minutes. When we say we need to go inside, when we say we need to drive the ball, when we say we need to get to the rim, it’s not because it sounds good, it’s because that’s the way to win. And we start out this game as we want to attack and pressure and get transition defense and we took two three’s to start the game. That’s not how you can win in this league. And we’re going to keep pushing it and keep driving it. And those that figure it out and can deal with it, will be a part of the resurgence of this program and those that don’t they’re not to be able to play in this because we can’t be a team that plays half way. We’ve got to be all out, all the time.”

“It’s tough, it really is. But they don’t understand how to sustain what we need to sustain. That’s why I did a little subbing with it. But it’s just the way that it is. We’ve just got to keep getting better with it. And I’ve got to make sure that every time we recruit in this program, that we’re getting a winning, this is what it takes to win mindset. Because these guys are trying but when you’re not locked in all the time the way it needs to be, you’re going to run into moments like that. And there’s no way we should have been giving up three’s. There’s no way we should have been so offensive minded as we were in the sense of living on the perimeter. And it has nothing to do with having a post man in the game. You saw what happened. Our guards got a lot more when we ran our actions on the baseline. They called it much better in the second half to be frank with you. I mean, there’s no way we should have had the discrepancy on free throws in the first half. We were more aggressive in the second half and we got the calls.”

On whether he likes having a week before playing another game