Ferrell goes for 27 in rout of Heritage Christian 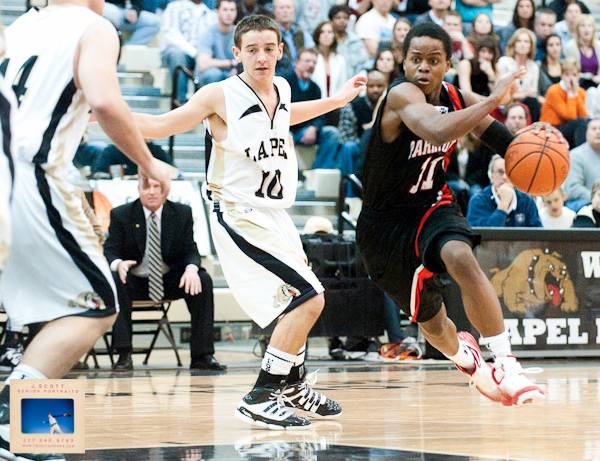 Park Tudor’s Kevin “Yogi” Ferrell (11) drives to the basket in a 76-53 win at Lapel on December 30, 2010. Photo by Jamie Owens of J. Scott Photography. Click here to view a gallery from this game and other Indiana high school games.

+ Cody Zeller (Washington): Twenty-nine points and 15 rebounds in a 80-59 win over Evansville Mater Dei on Jan. 7.

+ Hanner Perea (La Porte La Lumiere): Did not play as game against Summit Christian on Jan. 8 was canceled.

+ Peter Jurkin (United Faith Christian Academy, NC): Not listed in the box score in any of United Faith’s three games this past week on The Charlotte Observer’s web site.

+ Gary Harris (Hamilton Southeastern): Twenty-three points, two rebounds and two assists in a 62-51 win over Fishers on Jan. 4. (ITH coverage here). Eighteen points in a 61-33 win over Harrison (West Lafayette) on Jan. 7. Sixteen points in a 65-56 win at Muncie Central on Jan. 8.

+ Jeremy Hollowell (Lawrence Central): Lawrence Central won a pair of games — 74-44 over Indianapolis Arlington on Jan. 4 and 57-50 at Columbus North on Jan. 7 — but no individual stats were available.

+ Mitch McGary (Brewster Academy): Sixteen points in a 86-77 win at the New Hampton School on Jan. 8.

+ Darryl Baker (Jeffersonville): Sixteen points and seven rebounds in a 68-62 loss to New Albany on Jan. 7.

+ Ernie Duncan (Evansville Harrison): Seventeen points, 10 rebounds and six assists in a 70-60 win at Evansville North on Jan. 7. Sixteen points in a 73-71 win over Princeton on Jan. 8.

+ Jaquan Lyle (Evansville Bosse): Twenty-two points in a 71-70 overtime win at Vincennes Lincoln on Jan. 8. Bosse won at Evansville Central, 75-65, on Jan. 7, but no individual stats were available. (Update: An e-mailer tells us Lyle had 14 or 16 in this game.)