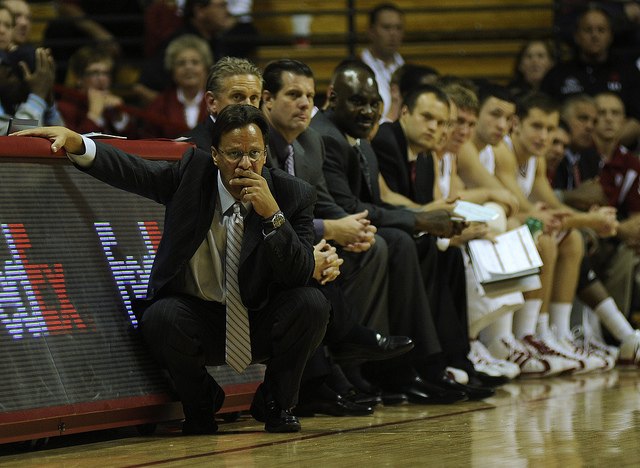 Indiana coach Tom Crean watches the action late in a win against Franklin on Wednesday, Nov. 3, 2010, at Assembly Hall in Bloomington, Ind. (Photo by James Brosher)

On the team’s effort:

“We’re getting better. We’re a better team than we were in Las Vegas. We’re a better team than we were last Monday night. We’ve started to make some turns back where we needed to be in the second half against Ohio State. We’ve had really good days of work and I had great confidence that we’d win this game, great confidence. And I think they did as the game went on but we made too many mistakes along the way and (Blake) Hoffarber made some tough shots. We didn’t get great basketball from different guys. The positive thing for me, and I hope I feel the same way when I watch the tape, is that we made so many mistakes and they got some loose balls and loose rebounds and we still had an opportunity to win this game going right down to the end. This team just deserves to get over the hump and know what that feel likes to win one of those games. It’s coming. I have no doubt.”

On the individual players’ efforts:

“I thought Tom Pritchard did an excellent job inside. Jeremiah Rivers needed to be three people tonight, and you look at his box score and it doesn’t say much, but he went and he played this game with four assists and without a turnover in 24 minutes. He had 11 deflections of our 54 and was asked to lay it on the line every possession. Victor (Oladipo) is starting to grow into that. We just need to have more resolve throughout the game from others in the defensive area. We were much, much better. We switched defenses and that was good … We had our opportunities right there. It wasn’t a perfect game. It wasn’t close to a perfect game by any stretch and we had our chances to win. These guys have a winning spirit, they have a winning mindset and it’s just a matter of time before we start to get it.”

On the team’s fight:

On the flow of the game:

On matching up with the bigs:

“Play them and match up with their personnel. They are going to run a lot of high-low. We had a lot of different game plans and at certain times we were able to play zone. It’s tough going with a straight zone with a player like Blake (Hoffarber) out there. He can get lost and hit shots out there.”

On the play at the end of the game:

“That’s tough to swallow, when you do everything you can to come back and get a loose ball foul. That’s a tough pill to swallow.”