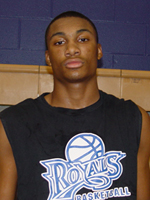 After a breakout spring and summer with the Eric Gordon All-Stars, sophomore Zak Irvin picked up scholarship offers from three Big Ten schools — Illinois, Indiana and Purdue — before ever playing a varsity game.

But with AAU now in the rear view mirror, the 6-5 guard is focused on helping Hamilton Southeastern wins games and ultimately, a tough sectional that includes Carmel, Fishers and Noblesville.

“The first thing is, we want to win our sectional this year,” Irvin told Inside the Hall on Thursday. “Hopefully we can win a state championship.”

The transition to the varsity level has gone well, according to Irvin, and the early results have been promising as he poured in 16 points in last Saturday’s season opener, an 84-78 win over Indianapolis Northwest.

“I was a little nervous before the game,” Irvin said of his varsity debut. “It’s a big jump from JV to varsity basketball. Tougher players and it’s more physical.”

Irvin has the benefit of playing alongside and practicing with one of the top juniors in the country, Gary Harris, and the opportunity to compete with his talented teammate is paying dividends thus far.

“He’s the leader on our team this year,” he said of Harris, who is also being recruited heavily by Indiana. “I learn a lot practicing with him every day. We just make each other better.”

While it’s not currently his top priority, Irvin also continues to evaluate his recruiting landscape. The sophomore guard, known for his ability to knock down shots from the perimeter, is hearing regularly from IU, Purdue, Xavier, Butler, Baylor, Miami (Fla.), Illinois and Michigan.

The pitch from Tom Crean to become a Hoosier, according to Irvin, is centered around the opportunity to play with a strong supporting cast, including his friend and AAU teammate, Devin Davis.

Irvin said the early commitment from Davis took him a bit by surprise, but the overall recruiting momentum for Crean and the IU program is not, he said, totally unexpected.

“He’s a great recruiter, so I expected things to be turning around.”

Here’s a video interview with Irvin from last spring’s adidas May Classic: