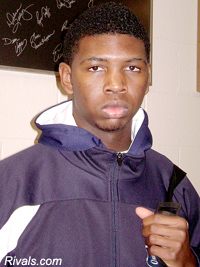 One of the new names to emerge on the IU recruiting radar from Friday’s Hoosier Hysteria was 2013 Cleveland Benedictine forward Mark Williams. The 6-7, 235-pound Williams spoke to Inside the Hall on Monday night about his experience at Hysteria and his interest in the IU program:

On his experience at Hoosier Hysteria

“The whole experience was great. The tradition speaks volumes. The fans were very involved and everybody loves basketball there. And that’s my love so that place and me, we get along well. The players are cool. It just was a great night. There was a lot of energy in that building.”

On how the visit to Bloomington came about

On his game and style of play

“I am a classic type player. I’m the type that will walk you down to the post, use jump hooks, a very fundamental type person. I recently developed a nice little jumper and have found my perimeter game expanding. I’m trying to be an all-around force.”

On the scholarship offer from Indiana

“Coach Crean did offer me. It’s a funny story because on Friday while my parents and I were talking to him, I guess he offered, but we were like uncertain, so my dad asked Coach Buckley, ‘did he offer us?’ And immediately, like no later than five minutes after, Coach Crean came up to my parents and I and was like, ‘yes, we definitely offered.'”

On getting his first offer from a major program like Indiana

“It’s big. Anybody would be very grateful and happy for the opportunity. It’s big. I’m just going to keep a level head about it and keep working hard because I want these offers and this publicity to keep piling up.”

On where things stand with his recruiting process

“It’s only my first visit. I’m going to visit some more schools and have an open mind about things.”

On the schools he’s hearing from besides Indiana

“Ohio State, Michigan State, Penn State, Wisconsin, West Virginia. And there’s others like Akron and places like that.”