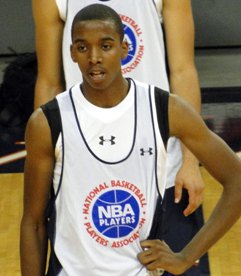 After a breakout summer on the AAU circuit, McCluer North (MO) guard B.J. Young shot up to five-star status in the recruiting rankings.

Fresh off being named the MVP of the Five-Star Super Session in New York, Inside the Hall caught up with the 6-3 combo guard for the latest on his recruitment:

On the schools currently involved in his recruitment:

“Indiana, Arkansas, Illinois State, I think Kansas and Memphis are starting to get into it, but I don’t really know yet. Baylor is one of them. Iowa, Iowa State, Marquette, Louisville, Providence, North Carolina State.”

On where he stands with his recruitment:

On his decision to take an official visit to Arkansas:

“I really like Arkansas. I got family from down in Arkansas. They wanted to set up a visit with me, so I got a date set up with them.”

“I talk to Indiana regularly. They get two calls per week. I still talk to them regularly. I like them a lot. Me and Indiana are still really close.”

On potentially taking an official visit to Bloomington:

“I think they want me to take an official visit and they want to make an in-home visit too.”

On his timetable for making a decision:

“Probably after I take all of my visits and sit down with my family and talk. So probably in November sometime.”

On where he sees himself fitting in at Indiana and how much of a priority he is for IU:

“They’ve made it seem like I’m very important. I think they want me to fit in as a combo guard, but I think I could go down to Indiana and me, Austin and Cody, if we all decided to go, we would be a good trio.”

On how the first three weeks of school at McCluer North:

“School is going great. Everything’s good. I’m getting my classes right, getting my grades. So I’m good for right now.”

On placing an importance on academics and his maturation process:

On potentially being a part of rebuilding the Indiana program:

“I know if I go there then we can turn the program around. I know Coach Crean and his resume shows that he has a winning record.”