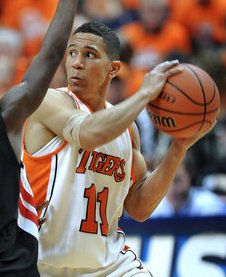 The Fan Report is Inside the Hall’s version of Letters to the Editor. Submit a Fan Report at this link. Today’s entry was submitted by Kelin Blab.

Notes and observations from Spiece Indy Heat’s 87-85 win over Queen City Prophets at the Hoosier Shootout:

+ Nic Moore, Spiece Indy Heat (pictured): The Warsaw guard took and made every big shot. He is very crafty inside and drew several fouls. He can flat out shoot it. He plays with guts and is willing to guard anyone. To begin the game he was guarding Aaron Thomas and did a good job on him despite the size difference. He was impressive to say the least.

+ AJ Hammons, Spiece Indy Heat: I hope prep school helps him next season with his physical play and toughness. He has a ton of upside, but drifts a lot in games. For a 7-footer, he really doesn’t make his presence felt on the court. Physically he looks great and he displays soft touch inside. Also a smart defender.

+ DeJuan Marrero, Spiece Indy Heat: Tough. That is his game. Tough defensively, tough rebounder, just tough. I, nor he, has any idea what position he will play in college. He played on the wing and struggled with his jumper and ball handling. If he gets a decent mid-range game and improves his ball handling, he will be a stud. What gets him over is he plays harder than anyone on the court at all times.

+ Aaron Thomas, Queen City Prophets: I finally saw a motivated Aaron Thomas. Prior to the game, you could tell he was ready for this one. After a shoving match with Purdue recruit Raphael Davis, Thomas went on a run on both ends of the court. He gets to the basket and finishes strong. In one instance he got to the basket and finished with a left-handed dunk. His ability to shoot is definitely there and he possesses tremendous upside. If a coach can get him motivated consistently, he will be a big-time player.  He finished with 26 points.